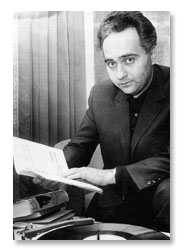 As a child István Kertész learnt to play the violin and piano, before going on to study composition and the violin between 1949 and 1953 at the Liszt Academy in Budapest, where he was a pupil of Kodály and Leo Weiner. He also received instruction on conducting from Lászlo Somogyi, and was influenced by Otto Klemperer, who at this time was active at the Budapest Opera, and by Bruno Walter. Kertész was appointed chief conductor with the Györ Philharmonic Orchestra in 1953, holding this position for two years before returning to Budapest to work as a répétiteur and conductor at the Budapest Opera. Following the 1956 Hungarian uprising against Soviet influence he left Hungary with his family and settled in Germany, later taking German citizenship.

After further conducting study in Rome with Fernando Previtali at the Accademia di Santa Cecilia, Kertész obtained conducting engagements with the opera houses of Frankfurt am Main, Hamburg and West Berlin; he became chief conductor at Augsburg in 1958, remaining there until 1963. During this period his career began to develop internationally. In 1959 at Trieste he conducted the Italian première of Prokofiev’s opera The Fiery Angel with Leyla Gencer in the title role, made his United Kingdom debut in 1960 with the Royal Liverpool Philharmonic Orchestra, and appeared with the London Symphony Orchestra for the first time in the same year. His American debut followed in 1961 when he conducted on a tour by the North German Radio Symphony Orchestra and in the same year he made his Salzburg Festival debut with Mozart’s Die Entführung aus dem Serail, returning to conduct there annually until 1964; a further debut, at the Royal Opera House, Covent Garden, followed in 1966 with Verdi’s Un ballo in maschera.

Kertész was appointed chief conductor at the Cologne Opera in 1964 and later, in 1971, took on responsibility for the city’s orchestral concerts, which were given by the opera’s orchestra under the name of the Gürzenich Orchestra. He conducted a wide repertoire at the Cologne Opera, including a highly-praised production of Mozart’s final opera La Clemenza di Tito that helped to re-establish this work in the international repertoire. He succeeded Pierre Monteux as chief conductor of the London Symphony Orchestra in 1965 and held this position until 1968, parting from the orchestra as a result of disagreement over levels of influence on artistic decisions. By this time Kertész was enjoying a substantial international career, having established close relationships with the Cleveland Orchestra, and the Israel and Vienna Philharmonic Orchestras. It was while he was working with the Israel Philharmonic in 1973 that he lost his life in a swimming accident in the Mediterranean Sea near Tel-Aviv, aged only forty-four and having recently been named as the new chief conductor of the Bamberg Symphony Orchestra: he was arguably already one of the major conductors of his generation.

Kertész’s live performances and numerous recordings were generally informed by a genial and lyrical character. His ability to create a distinct ‘atmosphere’ had a very positive effect upon orchestral morale, and he was able to draw much beautiful and sensitive playing from the many different orchestras with which he was associated; in performance he conducted with an expansive but clear beat. He was placed under contract by the Decca record company relatively early in his international career and recorded an extensive discography for this company. This included an exceptionally characterful cycle of all the symphonies of Dvořák with the London Symphony Orchestra and a similarly sunny set of the Schubert symphonies with the Vienna Philharmonic Orchestra. He also recorded a glowing Brahms symphony cycle with the Vienna Philharmonic; at his death he had yet to record the finale of the Variations on a theme by Haydn, which the orchestra subsequently recorded without a conductor in his memory. Like an earlier Hungarian signing for Decca, Sir Georg Solti, Kertész recorded works by his compatriots Bartók and Kodály and all these recordings were aided by the exceptionally high standard of sound recording achieved by the Decca engineers. His account of Bartók’s one-act opera Duke Bluebeard’s Castle showed that Kertész had the ability to create and sustain a dramatic atmosphere when required; by contrast, his complete recording of Kodály’s Háry János with Peter Ustinov taking the title part was very humorous. Kertész was a most stylish conductor of Mozart, as is demonstrated clearly by his recordings of a selection of the symphonies with the Vienna Philharmonic, and by his only operatic recording, La Clemenza di Tito. He was also an exceptionally sympathetic accompanist: his recordings of Mozart piano concertos with Vladimir Ashkenazy, Sir Clifford Curzon and Hans Richter-Haaser have well stood the test of time.