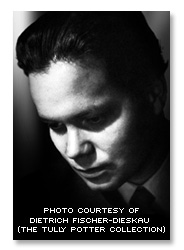 Dietrich Fischer-Dieskau’s parents stood squarely in the German professional middle class, whose values permeated the lives of the family members: his father, a classical scholar, was the principal of a secondary school and his mother was a teacher. His grandmother on his father’s side was a member of the von Dieskau family, for one of whom J.S. Bach had written his Peasant Cantata of 1742. Initially Fischer-Dieskau studied piano, both with his mother and while at school; but having also sung as a child, at sixteen he commenced formal vocal study in Berlin with Professor Georg Walter.

In 1943, after completing one semester at the Berlin Conservatory, Fischer-Dieskau joined the Wehrmacht; but after capture by the Allies in Italy spent two years as an American prisoner of war, during which he would often sing to his fellow prisoners. He returned to Berlin in 1947, studied briefly with Professor Hermann Weissenborn at the Conservatory, and soon was singing professionally. As he has commented about this period, ‘I passed my final exam in the concert hall.’

His first major professional engagement was in 1947 as a last-minute substitute for another singer in a performance at Badenweiler, given without rehearsal, of Brahms’s Ein Deutsches Requiem. In the autumn of that year Fischer-Dieskau gave his first lieder recital in Leipzig, soon followed by his first, very successful, Berlin concert at the Titania Palast. During the following year he broadcast Schubert’s Winterreise on Berlin radio and joined the Städtische Oper (Municipal Opera) in Berlin as a principal lyric baritone, making his debut in the autumn of 1948 as Posa / Don Carlo, with Ferenc Fricsay conducting. This company, which became the Deutsche Oper in 1961, was to be his artistic home until his retirement from opera in 1978.

Fischer-Dieskau quickly made his mark internationally, appearing as a guest at the Bavarian State Opera, Munich, the Hamburg State Opera and the Vienna State Opera, and from 1949 undertaking concert tours across France, Italy, Holland and Switzerland. He first appeared at the Salzburg Festival in 1951, singing Mahler’s Lieder eines fahrenden gesellen with Furtwängler conducting, and returned regularly from 1956 until 1973, appearing as the Count / Le nozze di Figaro (1960–1964), Verdi’s Macbeth (1965), and Don Alfonso / Così fan tutte (1972–1973) as well as giving numerous song recitals. Also in 1951 he made his London debut at the Royal Albert Hall, singing in Delius’s A Mass of Life with Sir Thomas Beecham conducting. Fischer-Dieskau returned to the UK frequently: highlights included the first performances of Britten’s War Requiem (1962, Coventry Cathedral) and his Songs and Proverbs of William Blake (composed for the singer) (1965, Aldeburgh Festival); and two notable appearances at the Royal Opera House, Covent Garden: as Mandryka / Arabella, with Georg Solti conducting (1965) and as Verdi’s Falstaff (1967). His debut at the Bayreuth Festival came in 1954 with Wolfram / Tannhäuser (1954–1955, 1961) and the Herald / Lohengrin (1954), followed by Amfortas / Parsifal (1955–1956) and Kothner / Die Meistersinger von Nürnberg (1956). His first concert tour of the United States was in 1955, singing both in concert and in lieder recitals, including a complete Winterreise without intermission in New York accompanied by Gerald Moore.

Having retired from opera in 1978, Fischer-Dieskau made his last public appearance as a singer aged sixty-seven in a gala concert on New Year’s Eve 1992 at the Bavarian State Opera. Subsequently he devoted himself to teaching, painting and writing books. Possessed of a beautiful natural voice, Fischer-Dieskau also had the consummate ability to communicate meaning through vocal inflection, posture, gesture, facial expression and eye contact, making him one of the most complete singers of the twentieth century. In an interview with the English journalist Martin Kettle, Fischer-Dieskau revealed that the greatest influence upon him was the conductor Wilhelm Furtwängler: ‘He once said to me that the most important thing for a performing artist was to build up a community of love for the music with the audience, to create one fellow feeling among so many people who have come from so many different places and feelings. I have lived with that ideal all my life as a performer.’