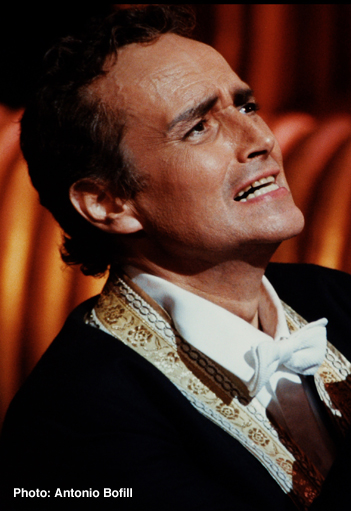 The youngest of three children, José Carreras was born into a working-class family who moved to Argentina in 1951, seeking a better life, only to return the following year. Already a keen singer, at the age of six he saw the film The Great Caruso, starring Mario Lanza, after which his ardent singing of ‘La donna è mobile’ from Rigoletto eventually convinced his parents and grandfather, an amateur baritone, to fund music lessons. Initially Carreras learnt piano with Magda Prunera, and at the age of eight began to study at the Barcelona Conservatory. Having made his radio singing début at the same age, his operatic stage début came at only eleven in Barcelona’s opera house, the Liceu, as Trujamán in Falla’s El retablo de Maese Pedro, quickly followed by the boy soprano part in the second act of La Bohème. His studies continued: at the Liceu Conservatory, privately with Francisco Puig, and later with Juan Ruax, who encouraged him to audition for his first tenor rôle. This was Flavio/Norma, which he sang at the Liceu in January 1970, catching the attention of Montserrat Caballé in the title part, who invited him to sing Gennaro opposite herself as Lucrezia Borgia at the Liceu in December of the same year. Caballé did much to promote his early career, her brother acting as his manager until the mid-1990s.

Carreras made his international début in 1971 at London’s Royal Festival Hall, singing opposite Caballé in a concert performance of Maria Stuarda. At the end of the same year he won the Parma Voci Verdiane Competition. This resulted in his Italian début at the Teatro Regio in Parma, as Rodolfo/La Bohème, which attracted high critical praise. Later in 1972 Carreras made his first American appearance, as Pinkerton/Madame Butterfly at the New York City Opera, quickly followed by débuts at many of the world’s leading opera houses: in 1973 in San Francisco as Rodolfo, and Philadelphia as Alfredo/La traviata; in 1974 in Vienna as the Duke/Rigoletto, Covent Garden as Alfredo and the Metropolitan Opera as Cavaradossi/Tosca; and in 1975 at La Scala, Milan as Riccardo/Un ballo in maschera.

Wherever he sang Carreras made an immediate impact. His singing was vividly described by Alan Blyth on the occasion of his British début in Maria Stuarda: ‘Not only was his a profoundly beautiful tenor, typically dark-hued in the Spanish vein, but its owner knew how to employ it to maximum advantage and, almost as important, had the vital, vivid presence of a born communicator.’ Throughout the remainder of the 1970s and during most of the 1980s Carreras pursued an international career at the highest level, singing with the major operatic divas and conductors of the period. A recording contract with Philips resulted in him participating in several of its recordings of early Verdi operas under the baton of Lamberto Gardelli. He also collaborated frequently with Herbert von Karajan, whose encouragement in his taking on heavier rôles, such as the tenor leads in Aida, Carmen and Don Carlo, was held by some to push his natural lyric voice too hard, thus shortening his vocal prime.

During the1980s Carreras added musicals and operettas to his hitherto strictly operatic repertoire, for instance in his recordings of West Side Story (1985), conducted by its composer Leonard Bernstein, and South Pacific (1986). He also ventured into film, in 1986 portraying the Spanish tenor Julián Gayarre in Romanza Final (The Final Romance). It was while making a film version of La Bohème in Paris during 1987 that Carreras was diagnosed with leukemia. Following rigorous treatment in Seattle he recovered, embarking on a series of come-back recitals during 1988 and 1989, and appearing on stage in Barcelona in the title rôle of Balada’s Cristóbal Colón, especially written for him.

During the 1990s Carreras’s operatic performances became less frequent, while still including some notable highlights, such as title rôle stage débuts in Stiffelio (Verdi) at Covent Garden (1993) and Sly (Wolf-Ferrari) at Zürich (1998), the rôle in which he made his final operatic appearance (Tokyo, 2002). In 1990 Carreras had participated in the first of the ‘Three Tenors’ concerts. Staged at the Caracalla Baths in Rome, this was intended by his two colleagues Luciano Pavarotti and Plácido Domingo to be a ‘welcome back’ event following his serious illness. Broadcast on television during the football World Cup and distributed globally on video and CD, this proved to be exceptionally popular: by 1999 the CD recording had sold an astonishing thirteen million copies worldwide, making it the then-highest-selling classical recording.

It was thus natural that Carreras’s career would subsequently move to often large-scale concerts and recitals with a repertoire drawn from Neapolitan songs and the light-Classical and popular repertoires. He has also fundraised tirelessly and with notable success for the leukemia research foundation which he established following his recovery from the illness.

During the early years of his career Carreras possessed a voice of great natural beauty. By the mid-1980s it had however lost much of its original character, with loud high notes in particular causing problems. Nonetheless there is a great deal still to enjoy in his extensive discography, much of it created during the late 1970s at the height of commercial recording activity.