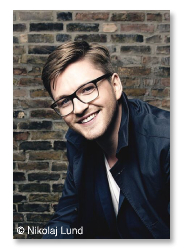 German baritone Samuel Hasselhorn has won numerous prestigious competitions and awards, including the 2018 Queen Elisabeth Competition and the Emmerich Smola ‘SWR Young Opera Star’ prize. During the 2018–19 season he was a member of the Vienna State Opera.

Lieder recitals and concert appearances have taken him across Europe, to venues such as the Palais des Beaux-Arts in Brussels and the Barbican Centre in London. In the 2017–18 season he made his concert and recital debuts at the Munich Philharmonie, Wigmore Hall and the Zurich Tonhalle among others, and in 2017 toured North America.