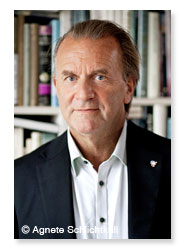 Upon completing his studies in musicology at the University of Copenhagen and bassoon at the Royal Academy of Music, Bol Holten established his reputation as a conductor of early music vocal groups, first with Ars Nova which he formed in 1979 and later with Musica Ficta formed in 1996.

He has an international reputation as a leading specialist in early music, especially in vocal polyphony. Musica Ficta have proved to be a dominant force in Danish musical life and one of the finest vocal ensembles in Europe having given over 250 concerts and theatre performances, and released multiple recordings.

Bo Holten has been a guest conductor with a wide range of ensembles and choirs in Scandinavia and abroad, and in 2007 he was appointed chief conductor of the Flemish Radio Choir.

He has composed over 100 works including symphonies, solo concertos, works for chorus and orchestra, operas, and musicals. He has also written works for chamber ensembles, song cycles, and pieces for percussion ensemble, as well as scores for films and television series. Among his most widely performed works are the 30 a cappella works which span his composing career. In autumn 2014, Bo Holten staged his second Gesualdo opera Gesualdo – Shadows, and in 2018 he completed his grand opera on Martin Luther, Schlagt sie tot!