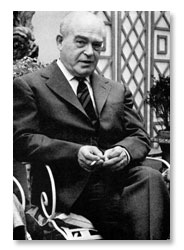 Paul Kletzki was born into a vigorous Jewish community and began his musical studies early, quickly gaining recognition for his skills both as a violinist and as a pianist. He attended the Warsaw Conservatory, where he was taught by the violinist and conductor Emil Młynarski, and also Warsaw University; and moved to Berlin in 1921 to continue his studies at the High School for Music where he came under the influence of two major figures of the period: the composer Arnold Schoenberg and the conductor Wilhelm Furtwangler. Kletzki was leader of the Łodź Philharmonic Orchestra from 1916 to 1919, but saw himself primarily as a composer. He wrote a significant body of work between 1921 and 1933, including two large symphonies, a capriccio, three string quartets and at least twenty songs, and made his conducting debut in 1923 in a concert of his own music. Furtwangler also performed Kletzki’s music, recommending his work to the publisher Simrock and inviting him to conduct the Berlin Philharmonic Orchestra in 1928 in a programme that included his violin concerto. This was well received, as was his piano concerto at its first performance in Leipzig in 1932. All his compositions were published, but were then proscribed by the National Socialist Party when it came to power in 1933, and as a result Kletzki’s publishers destroyed all his printed music and melted down their printing plates.

Kletzki fled to Italy, taking printed and manuscript copies of his music with him in a metal trunk and teaching in Milan at the Scuola Superiore di Musica. During 1937 and 1938 he also held the post of chief conductor of the Kharkov Philharmonic Orchestra in Russia, but had to quit this position because he was of Polish origin. Mussolini’s Fascists were no kinder towards Jews than the Nazis, with the result that in 1939 Kletzki was forced to flee once again. Unable to take his trunk of music with him, he hid it in a basement near Milan’s opera house, La Scala, and settled in Switzerland with his wife, who was Swiss. Here he wrote his last works, including his Symphony No. 3 of 1939, subtitled ‘In Memoriam’. Kletzki has been quoted as saying that the Holocaust, and the loss of his music (and especially the fact that his publisher had even melted down the printing plates) killed in him the desire to compose. During World War II he taught at the Lausanne Conservatory, and between 1943 and 1949 he conducted the Lucerne Festival Orchestra in concerts which helped him to establish an international reputation. He appeared in Paris shortly after the liberation, conducting Mahler’s Symphony No. 1, and was invited by Toscanini to participate in the celebrations surrounding the reopening of La Scala in 1946. In the autumn of that year Walter Legge invited him to record with his recently formed Philharmonia Orchestra, which he also conducted in concerts, as well as the London Philharmonic and Royal Philharmonic Orchestras.

For the rest of Kletzki’s life his conducting career flourished. He appeared regularly throughout Europe as a guest conductor, becoming a Swiss citizen in 1949, and toured Australia in 1948, once again performing some of the symphonies of Mahler. With the Israel Philharmonic Orchestra he appeared on tour in Europe during 1955, having previously with this orchestra recorded for Legge and the Columbia label in 1954 Mahler’s Symphony No. 9 and Schoenberg’s Verklarte Nacht. Kletzki was chief conductor of the Royal Liverpool Philharmonic Orchestra for the 1954–1955 season, but, as had previously been his experience in Russia, was unable to continue in this role because of British Civil Service rules concerning the engagement of foreigners. He made his American debut in 1957 with the Cincinnati Symphony Orchestra, and also led concerts with the Chicago Symphony and Philadelphia Orchestras. The success of these appearances resulted in him being appointed as chief conductor of the Dallas Symphony Orchestra for three seasons between 1958 and 1961: together with Antal Dorati he is credited in Dallas with significantly developing the orchestra’s playing standards.

The cellist Mimi McShane, who was hired by Kletzki, had vivid recollections of his time in Dallas: ‘He was very European, very old-fashioned. He liked to throw tantrums, but everybody really respected him, and what he said about the music was the word of God. As a conductor, his technique was perfect. He didn’t really get along with the Dallas social scene, though. I imagine the Dallas lifestyle was very alien to him.’

Kletzki left the Dallas orchestra ostensibly because of its inability to secure a recording contract, and henceforth confined himself to appearances in Europe because of his wife’s weakening health. Later appointments included the chief conductorships of the Berne Symphony Orchestra (1964–1967) and of Ernest Ansermet’s Suisse Romande Orchestra (1967–1970), with which its founder maintained a close connection until his death in 1969. Kletzki returned to his musical roots late in his life through guest appearances with the Warsaw Philharmonic and the Czech Philharmonic Orchestras, with whom he recorded a much-admired cycle of the Beethoven symphonies. In 1965 a construction crew working near La Scala in Milan found the metal trunk in which he had placed his music before World War II, but Kletzki was never to open it, afraid that, having lost his music once, it might have been destroyed a second time by nature. He died unexpectedly in 1973 while working with the Royal Liverpool Philharmonic Orchestra.

Interviewed by Tully Potter, the leader of the Lucerne Festival Orchestra, Peter Rybar, gave a graphic description of Kletzki as a conductor: ‘He conducted very well, with lovely gestures – it was very professional conducting – and he was very emotional, he was almost crying sometimes.’ The same point is made by the biographer of the Philharmonia Orchestra, Stephen Pettitt, who also noted Kletzki’s useful background as a string player: ‘Kletzki’s experience as a player made his conducting gestures particularly sympathetic to the strings of the Philharmonia Orchestra, to whose tone he brought a bloom – ‘the burning sound!’ as he demanded from them. He was a very emotional conductor, too; his desire for warmth of string sound came from this emotionalism. “Cry it!” he would beg, tears rolling down his cheeks as if in sympathy, and the tone came.’

Kletzki’s discography is large. He recorded consistently from the advent of tape recording and the long-playing record until his death: initially for EMI, and subsequently for several other labels, notably the Concert Hall Record Club, Decca and Supraphon. He was equally adept as a symphonic conductor and as an accompanist. Among his many outstanding records are very fine accounts of Mahler’s Symphonies Nos 1 and 4 and Das Lied von der Erde (with Murray Dickie and Dietrich Fischer-Dieskau); Sibelius’s Symphonies Nos 1 and 2; Tchaikovsky’s Symphony No. 6 ‘Pathetique’ and Manfred Symphony; and a powerful reading of Prokofiev’s Symphony No. 5, as well as numerous shorter works. Two outstanding concerto recordings are Berg’s Violin Concerto, with the Belgian violinist Andre Gertler, and Chopin’s Piano Concerto No. 1, with Maurizio Pollini. For Concert Hall Kletzki added Tchaikovsky’s Symphony No. 4 and Beethoven’s Symphonies Nos 1, 3, 5 and 6 to his recorded repertoire. His final recordings for Decca, with the Suisse Romande Orchestra, maintained this high standard, and included emotional accounts of Rachmaninov’s Symphonies Nos 2 and 3 and Nielsen’s Symphony No. 5, as well as Hindemith’s Symphony, Mathis der Maler and Lutosławski’s Concerto for Orchestra. As the archives of many European radio stations are gradually explored in depth, more performances conducted by Kletzki have appeared. These include refulgent accounts of Brahms’s Double Concerto, with Adolf and Hermann Busch and the French National Radio Orchestra, and of the same composer’s Symphony No. 4 with the Czech Philharmonic Orchestra.