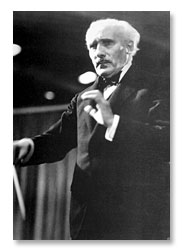 Arturo Toscanini was born into a poor family that was imbued with republican ideals. One of his early teachers noticed that he could quickly memorise songs and poems, and suggested to his parents that he should be enrolled in the local conservatory of music. Although the conditions there were harsh he excelled as a student, graduating in 1885 after gaining the maximum number of points in his exams and receiving the highest honours in cello and composition, his formal subjects of study. He was immediately engaged by an Italian opera company which was about to undertake a tour of Brazil. After the local conductor who had been engaged vanished and the Italian assistant conductor was booed from the stage in Rio de Janeiro, his colleagues, knowing his brilliance, turned to Toscanini, still only nineteen, to conduct Verdi’s Aida, which he did from memory and with distinction. He was entrusted with the direction of the other operas performed throughout the tour, and returned to Europe with his reputation established.

For a time Toscanini continued as an instrumentalist, playing the cello in the orchestra of La Scala, Milan, for the first performances of Verdi’s Otello in 1887, while conducting opera in cities in Italy and Spain. He led the first performances of Leoncavallo’s Pagliacci in Milan in 1892 and was appointed chief conductor of the Teatro Regio, Turin, in 1895, the year in which he led there the first performances in Italy of Wagner’s Gotterdammerung. During the following year he conducted in Turin the world premiere of Puccini’s La Boheme and his first symphony concert: the programme included works by Brahms, Schubert, Tchaikovsky and Wagner. At the Turin Exhibition of 1898 he conducted the Italian premiere of three of Verdi’s Quattro pezzi sacri, which resulted in him becoming a colleague of the composer. The first of Toscanini’s three spells as music director of La Scala lasted between 1898 and 1903, when he conducted many notable first Italian performances, for instance of Wagner’s Die Meistersinger von Nurnberg, Tchaikovsky’s Eugene Onegin, and Debussy’s Pelleas et Melisande. After resigning over artistic issues he returned to La Scala between 1906 and 1908, before moving to the Metropolitan Opera, New York; here he saw off his rival as an opera conductor, Gustav Mahler (who then moved to conduct the New York Symphony Orchestra), and subsequently dominated the theatre between 1908 and 1915.

With Italy a participant in World War I, Toscanini was keen to return home, later insisting on performing near the war zone to support the morale of Italian troops. He returned to La Scala in 1920, and having effectively reorganised the house, exerted an iron grip over its activities until 1929, vigorously promoting contemporary works. During this period he toured with the company to New York, where he made his first recordings employing the acoustic process (1920–1921), and in 1929 to Vienna and Berlin: here his interpretations were acclaimed as revelatory and were highly influential. Following two seasons as a co-conductor, the second with Willem Mengelberg, between 1928 and 1936 he served as chief conductor of the New York Philharmonic Orchestra. Toscanini made his debut at the Bayreuth Festival in 1929, but as an avowed anti-fascist he refused to conduct in Germany following the assumption of power by the Nazi party in 1933; however he continued to conduct in Austria, principally at the Salzburg Festival, until the Anschluss of 1938. Up to the outbreak of World War II in 1939 he also conducted in several European centres, including Paris and London, where he made notable recordings with the BBC Symphony Orchestra, and at the Lucerne Festival (1938, 1939), where he directed an orchestra largely composed of refugees from Germany and Austria. In addition, as a strong supporter of Jewish musicians, Toscanini conducted early performances in the Middle East by the Palestine Symphony Orchestra, later to become the Israel Philharmonic Orchestra, during 1936 and 1938.

In 1937 Toscanini was approached by General David Sarnoff, the formidable head of the National Broadcasting Company of America and of its parent body RCA, which had already recorded him with the New York Philharmonic. Sarnoff offered Toscanini the conductorship of a broadcasting orchestra which would be formed especially for him to direct. Toscanini agreed, and led the NBC Symphony Orchestra with great distinction until 1954, when his memory began to fail him and he promptly retired from conducting. The vast majority of his recordings date from this period, and the relationship of orchestra and conductor is one of the most closely documented ever, through commercial recordings for RCA, and recordings of public and radio concerts as well as numerous rehearsals. Toscanini returned to Italy in 1946 and to La Scala once again, conducting several significant ceremonial concerts. He died in 1957, just before his ninetieth birthday, at his home in Riverdale, New York.

Toscanini’s performances generally possessed a strong forward drive, emphasizing the overall structure of the piece, while in addition giving minute attention to the smallest detail, often overlooked by others. For him the single most important element of a performance was that it should sing: ‘Cantare!’ (‘Sing!’) he would cry to his orchestras in rehearsal. His relentless pursuit of the highest orchestral standards, allied to an insistence in most instances on the letter of the score, has resulted in him being viewed as the polar opposite of conductors such as Furtwangler, whose interpretative position was apparently far more subjective. Although as an individual Toscanini stood up to tyranny wherever he found it, when on the podium he expected everyone to bend to his will, demanding that his musicians and singers invest their entire being in a performance, just as he himself did.

The published recordings of Toscanini conducting are numerous and have been the subject of exhaustive study. Essentially his discography falls into two halves, if the early acoustic recordings are discounted. The first half contains studio recordings of unparalleled excellence made before World War II with the New York Philharmonic Orchestra; and others with the BBC Symphony Orchestra which represent a slightly more relaxed, but nonetheless still vital, attitude to musicmaking. The creation of the second half of his discography commenced on Christmas Day 1937, when he conducted the NBC Symphony Orchestra for the first time, and lasted right up until his final concert with the orchestra in 1954. This vast legacy of recordings derived from his work with the NBC Orchestra covers a huge repertoire, from popular items such as operatic overtures to the very foundations of the orchestral repertoire, such as Beethoven’s symphonies and Missa Solemnis. The series contains in addition numerous operatic recordings of great documentary value, given Toscanini’s close connections with the genesis of several works, such as Verdi’s Otello and Puccini’s La Boheme.

Toscanini was one of the most formidable musicians of the twentieth century. During his lifetime he dominated the world of classical music through his performances, broadcasts and recordings. For many he personified the idea of the conductor: supreme musician, obsessive perfectionist, and extraordinary human being. But should we drift towards the transcendental in the face of such genius, we should also bear in mind Toscanini’s own down-to-earth comments to the players of the BBC Symphony Orchestra when rehearsing the opening of Beethoven’s Symphony No. 3 ‘Eroica’ at London’s Queen’s Hall in 1937, and recalled by the viola player Bernard Shore: ‘No! No! Nein! Is-a not Napoleon! Is-a not ’itler!! Is-a not Mussolini!!! Is Allegro con brio!’