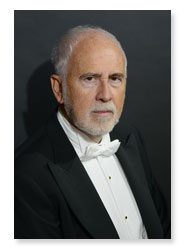 Jesús Lopez-Cobos was born into a musical family, his father being a leading member of the Wagner Society of Madrid. He studied for a doctorate in philosophy at Madrid University, where he also conducted the university choir; received tuition in conducting from Franco Ferrara in Venice, and worked as an assistant conductor at the Madrid Opera between 1964 and 1966. Further conducting studies followed with Hans Swarowsky at the Vienna Academy of Music, Peter Maag at the Accademia Chigiana in Siena, and Jean Morel at the Juilliard School in New York. Having won third prize in the Nikolai Malko Conductors’ Competition in Copenhagen, and first prize at the Besancon Conductors’ Competition in 1968, Lopez-Cobos made his professional conducting debut at the Prague Spring Festival and conducted Mozart’s Die Zauberflote at La Fenice opera house in Venice in 1969, after which he was appointed permanent conductor for the 1970–1971 season. He made his debut at the Deutsche Oper in Berlin during 1970 with Puccini’s La Boheme, subsequently accepting a five-year contract there as a conductor from 1972 to 1976.

During the 1970s Lopez-Cobos was active as a guest conductor, making his debuts at the San Francisco Opera with Lucia di Lammermoor (1972), at the Paris Opera with Il trovatore (1975), and at the Metropolitan Opera, New York, with Adriana Lecouvreur (1978); he conducted Lucia di Lammermoor at the Royal Opera House, Covent Garden, in 1980. He served as chief conductor of the Deutsche Oper, Berlin, from 1981 to 1990, as principal guest conductor of the London Philharmonic Orchestra from 1981 to 1986, and as associate conductor (1981–1983) and then chief conductor (1984–1989) of the Spanish National Orchestra. He led the Deutsche Oper in the first performances of Wagner’s Ring cycle in Japan in 1987, a year after he took up his appointment as chief conductor of the Cincinnati Symphony Orchestra, a position which he held until 2001, after which he became the orchestra’s conductor emeritus. With the Cincinnati Orchestra Lopez-Cobos recorded extensively for the Telarc label, raising its performance standards to an impressively high level. In addition to his work in America he was the chief conductor of the Lausanne Chamber Orchestra from 1990 to 2000, and was appointed chief conductor of the Teatro Real in Madrid from 2002 onwards.

Lopez-Cobos was a technically proficient conductor, who progressively extended his repertoire from opera to symphonic works while always maintaining an especial concentration upon Spanish music. His early operatic performances (some of which have been published on disc) were notable for their fire and headlong tempi, imparting great character to his readings; latterly however this element had been set within a more balanced interpretative approach. As this change took place, so Lopez-Cobos introduced into his repertoire major works of the Austro-German and Slav repertoires, such as the symphonies of Bruckner, Mahler and Shostakovich, of which he was a convincing interpreter.