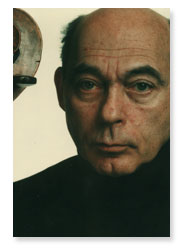 János Starker, born to a father of Polish descent and a Ukrainian mother, gave his fi rst performances at the age of six. Two years later he engaged in his fi rst teaching activities, demonstrating enormous precocity, and had five pupils by the age of twelve. At fourteen he gave his professional debut playing the Dvořák Concerto, deputising at just three hours’ notice. He attended the Liszt Academy from the age of eleven to study with Adolf Schiffer (a pupil and successor of Popper), and cited as strong influences Leo Weiner, Zoltán Kodály, Béla Bartók and Ernő Dohnányi, who all taught there. Starker left the Academy as World War II broke out and spent three months in a Nazi camp, but avoided being pressed into hard labour and survived, unlike his two violinist brothers.

After the war Starker took up a succession of principal cello roles, initially with the Budapest Opera and Philharmonic Orchestras, moving briefly to Vienna in 1946 to prepare for the Geneva Cello Competition which he lost, rather ironically, to his pupil Eva Janzer. Around this time he underwent a process of re-evaluating and rebuilding his technique, much like Menuhin whom he had seen in concert whilst the latter was in his darkest period of self-doubt. One product of Starker’s reflections was An Organized Method of String Playing, a programme which he taught around the world from 1955 onwards and published in 1965, in which he lays out every element of technique and physical preparation in great detail.

After spending a year in Paris (where he mastered Kodály’s supremely difficult Op. 8 Sonata for which he won the Grand Prix du Disque) Starker entered the United States in 1948 and took up a succession of orchestral posts, later moving to Indiana University and restarting his solo career in the late-1950s. He subsequently became one of the most recorded artists in the world, his discography spanning virtually the entire cello literature, including several issues of the Bach Cello Suites – initially Nos. 1, 3, 4 and 6 during 1950–1952, and complete sets on four further occasions. A number of composers wrote for him including Miklós Rózsa, Jean Martinon and Bernhard Heiden. In the last decade or so of his life Starker concentrated more upon teaching; his students included Tsuyoshi Tsutsumi and Maria Kliegel.

In all repertoire Starker’s sound is characterised by a clear tone and an almost encyclopedic technical mastery, which has been the subject of a number of television documentaries and magazine articles. Like many other modern players he eschews audible shifting, but also avoids wide vibrato (which he sees as a cover for poor intonation); the result is a restrained yet engaging sound. Arguably, some of his high-register playing can sound strained (as in the C.P.E. Bach concerto here from 1996), but this is a minor cavil. His recordings include a reflective Kodály Op. 4 Sonata (1952), some stylish Haydn from 1987 and an almost objective approach to the heartfelt but introspective Hovhaness and Prokofi ev works (1999 and 1956 respectively), whilst David Diamond’s Kaddish (1991) shows his more overtly impassioned side. Although his playing of eighteenth- century music may seem old-fashioned to ears now attuned to historically-informed practices, his 1988 Popper performances are superbly crafted, displaying his bullet-proof technical equipment. Starker’s playing is diffi cult to epitomise, perhaps one of the highest compliments that can be paid to an intelligent and sensitive musical artist.