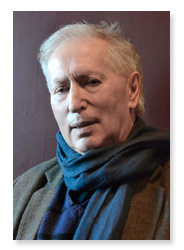 Thomas Sanderling was born in Leningrad on October 2, 1942. His father, celebrated conductor Kurt Sanderling, was forced to flee Germany in 1936. Young Thomas studied first at the Leningrad Conservatory, then at the Hochschule fur Musik in East Berlin. His first important post came at the age of 24, when he was appointed director of the Halle Opera. By his mid-twenties he was conducting in all East Germany’s principal orchestras and opera houses, including the Dresden Staatskapelle and the Leipzig Gewandhaus, and won the Berlin Critics’ Prize for his performances at the Komische Oper Berlin.

In the 1970s he developed a friendship with the declining Shostakovich, who presented Sanderling with scores to his Thirteenth and Fourteenth symphonies. Sanderling later led the German premieres of those controversial works. Sanderling’s premiere recording of Shostakovich’s Michaelangelo Suite directly led to his becoming assistant to both Herbert von Karajan and Leonard Bernstein.

Despite his close association with the music of Dmitry Shostakovich, his repertory is broad, encompassing Mozart, Beethoven, Brahms, Wagner, and Dvorak, as well as moderns like Karl Weigl and Americans Menotti, Barber, and Tobias Picker. He has conducted a mixture of orchestras worldwide, generally to critical acclaim, and made a number of successful recordings. He has also developed an equally respected reputation in opera, particularly for performances in the most important operatic centers in Germany, Austria, and Scandinavia.