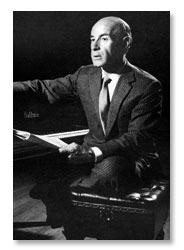 Erich Leinsdorf studied the piano from an early age and also the cello, as well as music theory and composition, but turned to conducting as an alternative to the many hours of practice required for mastery of the keyboard. He took part in a conducting master-class at the Salzburg Mozarteum in 1930, and went on to study music at the University of Vienna and at the Academy of Music between 1931 and 1933 while also working as a singing coach from 1931, and made his conducting debut in the Musikvereinsaal upon graduating at the age of twenty-one in 1933. In the same year he became the assistant conductor of Webern’s Workers Chorus, while also continuing to work as a coach. Having successfully auditioned before Bruno Walter and Arturo Toscanini at the Salzburg Festival in 1934, Leinsdorf was appointed as Toscanini’s assistant, working at the Salzburg Festival from 1934 to 1937, and also helping to prepare performances at the Florence Maggio Musicale between 1935 and 1937.

Foreseeing the annexation of Austria by National Socialist Germany Leinsdorf travelled to America in 1937; and with the aid of the future president Lyndon Johnson, whom he met through his friendship with the newspaper publisher Charles Marsh, was able to extend his visa and work indefinitely in the USA. Prior to this, he had made his successful debut at the Metropolitan Opera in January 1938, conducting Wagner’s Die Walküre with assurance despite limited rehearsal time. The following year, after the unexpected death of the principal conductor for the Met’s German repertoire, Artur Bodansky, and despite the opposition of Lauritz Melchior (who disliked his rehearsal requirements) and that of Kirsten Flagstad (who wished to install her accompanist Edwin McArthur), Leinsdorf was appointed to replace Bodansky. He remained with the Met until 1943, when he was appointed as conductor of the Cleveland Orchestra.

Before he was fully able to make his mark in Cleveland Leinsdorf was called up to serve in the US army, having taken American citizenship in 1942. Although he was discharged after only eight months his position in Cleveland no longer existed, so he returned to the Met and also appeared as a guest conductor with the St Louis Symphony and Los Angeles Philharmonic Orchestras, as well as with the Cleveland Orchestra. His next permanent appointment was as chief conductor of the Rochester Philharmonic, a post which he held from 1947 to 1956, significantly improving the orchestra’s performance standards. Leinsdorf took over the artistic direction of the New York City Opera for one season, 1956, when his repertoire of predominantly contemporary operas was an artistic success but a box-office failure; and returning to the Metropolitan Opera as conductor and music consultant in the following year he worked there until 1962 when he succeeded Charles Munch as chief conductor of the Boston Symphony Orchestra.

Leinsdorf was the complete opposite of Munch as a conductor: where Munch was inspirational Leinsdorf was carefully prepared and completely controlled. During his initial seasons in Boston he enjoyed some success, but his open criticisms of various perceived shortcomings and dislike of the political and administrative concerns of such a post resulted in his departure in 1969, happy, in his own words, to have been able to leave with his health intact. He continued to lead an active career as a guest conductor of both opera and concerts in America and Europe and appeared at the Bayreuth Festival in 1972 conducting a new production of Tannhäuser. Between 1977 and 1980 Leinsdorf served as chief conductor of the Berlin Radio Symphony Orchestra. A video recording exists of one of his final concerts, in which he conducted the Berlin Staaskapelle in music by Richard Strauss at the Garmisch-Partenkirchen Richard Strauss Festival in 1991.

Leinsdorf was an extremely intelligent individual: he wrote three books including his autobiography. He was at the same time highly restrained as a performer and as a result many of his readings appeared to be inhibited and to have little personal inflection. Nonetheless at his best he had the capability to deliver effective, if not always memorable, performances. His insistence on high technical standards and predictability as well as reliability made him an excellent recording conductor: consequently his discography is very large. In addition his years at the Metropolitan Opera resulted in a close link with the RCA record company, for whom he conducted numerous complete opera recordings, as well as many recordings with the Boston Symphony Orchestra during his period as chief conductor. Among the highlights of his discography are, in the field of opera, strong studio readings of Wagner’s Die Walküre with the London Symphony Orchestra and Lohengrin with the Boston Symphony Orchestra (the first operatic recording to feature an American symphony orchestra), Verdi’s Aida and Un ballo in maschera, Korngold’s Die tote Stadt and Cornelius’s Die Barbier von Bagdad. Many broadcasts of his Met performances have been reissued, especially of the Wagner operas, as well as his conducting of Die Meistersinger von Nürnberg at the 1959 Bayreuth Festival.

Of Leinsdorf’s enormous number of symphonic recordings, many retain considerable interest, including his accounts with the Rochester Philharmonic Orchestra of Rachmaninov’s Symphonic Dances; with the Los Angeles Philharmonic Orchestra of Richard Strauss’s Tod und Verklärung; and with the Concert Arts Symphony Orchestra of excerpts from Wagner’s operas. His complete recording of the symphonies of Mozart with the Royal Philharmonic Orchestra, one of the first to appear, is of more than historical interest although the performances typify his rather unyielding style. Of his recordings with the Boston Symphony Orchestra, all in superb sound, his interpretations of the complete symphonies of Prokofiev, of Mahler’s Symphonies Nos 3, 5 and 6, and of excerpts from Richard Strauss’s operas including the ‘Awakening’ scene from Die ägyptische Helena (with Leontyne Price) present him at his best.