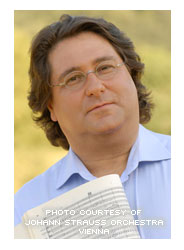 Born in Austria, Johannes Wildner studied conducting, violin and musicology and has established himself as one of the foremost Austrian conductors. His years of experience as a member of the Vienna Philharmonic and the Vienna State Opera Orchestra have given his conducting a distinctive stamp. After positions as chief conductor of Prague State Opera and first permanent conductor of Leipzig Opera, Johannes Wildner was the general music director of the New Philharmonic Orchestra of Westphalia (Germany) for ten years from 1997. He has been principal guest conductor of the BBC Concert Orchestra in London since 2010.

Johannes Wildner has recorded over sixty CDs, DVDs and videos. His most recent release is Robert Schumann’s complete works for piano and orchestra, with pianist Lev Vinocour and the RSO Vienna.