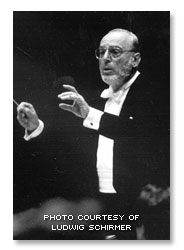 Michael Gielen’s father was the distinguished opera and drama director Joseph Gielen, who was active in the main European centres before and after World War II. In addition his uncle was the pianist Eduard Steuermann, a pupil of both Busoni and Schoenberg. With the advent of the war, the Gielen family settled in Buenos Aires in 1940, where Michael studied philosophy at the University of Buenos Aires; and music theory with Erwin Leuchter and piano with Rita Kurzmann-Leuchter, both privately, from 1942 to 1947. He began his professional career as a répétiteur at the Teatro Colón, the leading opera house in South America, and performed the complete piano works of Schoenberg in 1949. The following year Gielen returned to Europe, studying musical analysis with Josef Polnauer in Vienna from 1950 to 1953 at the same time as working until 1958 as a répétiteur at the Vienna State Opera. He also began to conduct at the Vienna State Opera from 1954, and was soon active as both a concert and recording conductor, appearing for instance often on the Vox label directing various Viennese orchestras in concerto accompaniments.

After twenty-three years at the head of the South West German Radio Symphony Orchestra in Baden-Baden, Gielen stepped down in 1999 to become one of its principal guest conductors. In addition he regularly conducts the Deutsches Symphony Orchestra in Berlin (formally the RIAS Berlin Orchestra) and at the Deutsche Oper, Berlin. Between 1987 and 1995 he also taught conducting at the Salzburg Mozarteum. Gielen was awarded an honorary doctorate by the Hochschule der Künste in Berlin in 2000 and has received many other honours including the Hessischer Staatspreis (1985), the Adorno-Preis of the city of Frankfurt (1986), the Grosser Musikpreis of the city of Vienna (1995) and the Musikpreis of the city of Frankfurt (1997). In addition to his conducting career Gielen has been active as a composer; initially strongly influenced by the Second Viennese School, his more recent works have reflected contemporary ideas and techniques.

As a conductor Gielen’s performances are marked by an extremely clear musical vision, in which extraneous emotion has little place. His performances unfold on the basis of a clear and dispassionate exposition of the score. This approach has made him a master of many of the major scores of post-war music, such as the Requiem of Ligeti, Zimmermann’s Requiem for a Young Poet, Stockhausen’s Carré, and Henze’s Dramatic Scenes from Orpheus, the first performances of which he conducted. In addition he is a notable interpreter of significant late-Romantic figures such as Bruckner, Mahler and Zemlinsky.

Gielen’s recording career falls into several distinct phases. His initial recordings, as already noted, appeared predominantly on the Vox label. One of the most important of these was the coupling of the Piano and Violin Concertos of Schoenberg, coincidentally with the South West German Radio Symphony Orchestra, which did much to increase knowledge and understanding of these works. During the 1960s and 1970s Gielen recorded a large amount of contemporary music, predominantly for the Wergo label; although another major Schoenberg recording, of his opera Moses und Aron with the Austrian Radio Symphony Orchestra, appeared on the Philips label. Following his permanent appointment with the Baden-Baden orchestra, many of Gielen’s performances with this ensemble were published by labels having a geographical association with it, such as the Stuttgart-based companies Intercord and Hänssler. Gielen’s undoubted power in the concert hall has also been captured on several live recordings, such as his 1981 Proms performance of Zemlinsky’s Lyric Symphony, with Elisabeth Söderström, Sir Thomas Allen and the BBC Symphony Orchestra. A musician of wide sympathies, Gielen has been a major force in music during the latter decades of the twentieth century and beyond, his work consistently challenging on an intellectual basis: for example he has often made unusual pairings on record of works by different composers, thus making the listener discard preconceptions and discover anew the works in question.