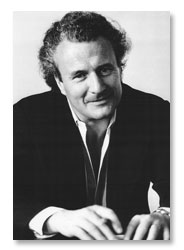 Colin Davis studied the clarinet with Frederick Thurston at the Royal Academy of Music and subsequently served as a military bandsman in the Household Cavalry. Among his earliest experiences as a conductor was the direction of the Kalmar Orchestra, formed by fellow students from the Royal Academy. The orchestra became better known when it changed itself into the Chelsea Opera Group, dedicated to exploring the operatic repertoire, and was conducted extensively by Davis in concert performances at Oxford and Cambridge during the early 1950s. Davis’s inability to play the piano had resulted in him being unable to study conducting formally at the Royal Academy, and also disbarred him from the traditional conducting apprenticeship of working in an opera house as a répétiteur. Consequently during his earlier career he was reliant upon a mixture of different jobs, such as conducting amateur groups, in order to gain experience. In 1957 he was appointed assistant conductor of the BBC Scottish Symphony Orchestra, as was later to be the case with Sir Andrew Davis and Sir Simon Rattle, and his career began to develop more rapidly.

He made his début with the Sadler’s Wells Opera during the following year conducting Mozart’s Die Entführung aus dem Serail. In 1959 and 1960 he further enhanced his reputation as a Mozart interpreter of note when he substituted for Otto Klemperer in a concert performance of Don Giovanni at the Royal Festival Hall, and then for Sir Thomas Beecham in Die Zauberflöte at the Glyndebourne Festival Opera. In 1959 he was appointed as chief conductor at Sadler’s Wells and was made the company’s music director in 1961, a post he held for four years until 1965. Here he led several outstanding productions, for instance of Mozart’s Idomeneo, Beethoven’s Fidelio, Weill’s Aufsteig und Fall der Stadt Mahagonny, and Stravinsky’s The Rake’s Progress. A notable contemporary opera première was Richard Rodney Bennett’s The Mines of Sulphur, first heard in 1965.

By now Davis was also making his mark as a symphonic conductor, notably with the London Symphony Orchestra. Together orchestra and conductor appeared with great success at the Promenade Concerts in London as well as elsewhere. This led to his appointment as chief conductor of the BBC Symphony Orchestra from 1967 to 1971, when he was a close colleague of Sir William Glock, then Controller of Music for the BBC and intent on revitalising the organisation’s music policy. Davis’s symphonic work took on an international character when he appeared successfully with the Berlin Philharmonic in 1971 and was appointed as principal guest conductor of the Boston Symphony Orchestra in 1972.

Meanwhile he enjoyed success in the opera house, with Benjamin Britten’s Peter Grimes at the Metropolitan Opera in New York (1966) and with new productions of Berlioz’s Les Troyens in 1969 and Michael Tippett’s The Knot Garden in 1970 at the Royal Opera House, Covent Garden. In the autumn of 1971 he took up the post of music director at Covent Garden in succession to Sir Georg Solti, although without the anticipated partnership with Sir Peter Hall as chief producer, an unexpected absence which Davis felt keenly. He remained at Covent Garden for fifteen years, during which he conducted a very wide range of repertoire. Among his most significant successes were Götz Friedrich’s productions of the three-act version of Alban Berg’s Lulu and of Wagner’s Ring cycle. Also of note were productions of Saint-Saëns’s Samson et Dalila, with set designs by the Australian painter Sidney Nolan, and of Benjamin Britten’s Peter Grimes, both of which were directed by Elijah Moshinsky.

Following these three important musical appointments in London, in 1983 Davis took up the post of chief conductor of the Bavarian Radio Symphony Orchestra in Germany for a period of nine years in succession to Rafael Kubelík, also a former music director of Covent Garden’s opera company. Here Davis gradually developed his repertoire with performances of symphonies by Bruckner and Mahler, as well as of music by the composers with which he had become particularly associated, such as Mozart, Berlioz and Stravinsky. The German association continued with his appointment in 1990 as honorary conductor of the Dresden Staatskapelle. In addition his long association with the London Symphony Orchestra was formalised with his appointment as principal conductor in 1995, and in 1998 he became the principal guest conductor of the New York Philharmonic Orchestra. His work with the LSO proved to be particularly fruitful, for instance with large-scale surveys of the music of composers such as Berlioz once again. As well as his work in the concert hall and the opera house, Davis was committed to music education and was a frequent and highly respected conductor of student orchestras. He was knighted in 1980.

In his earlier years as a conductor Davis was known as something of a firebrand who was not averse to lashing out in rehearsal. This may have helped to give his performances an undeniable vitality as well as vehemence. In appropriate music, such as some of the symphonies of Sibelius and Vaughan Williams, the results could be startlingly intense. As his career developed this characteristic of fierceness was replaced by a more reflective aspect to his musical character. He himself commented thus about the dilemmas that face conductors: ‘Conducting is like holding the bird of life in your hand: hold it too tight and it dies, hold it too lightly and it flies away.’ Davis’s mastery of the dynamics of conducting and of interpersonal relationships almost certainly account for the noticeably greater depth achieved in his performances of later years, especially with the London Symphony Orchestra. In reality his repertoire was not as large as that of other conductors, but what he did well he did better than anyone else before the public, such as his conducting of the music of Berlioz.

Davis’s recording career was very well managed, and his representation on disc was huge. He began in 1959 and achieved an early success with three discs of Mozart and orchestral favourites for the small World Record Club; these received very extensive distribution and remained in the catalogue for a long time, as his fame grew. Shortly afterwards he made several records for the specialist label L’Oiseau-Lyre. The objective of this company, to record repertoire unusual for the period, allowed Davis to tackle early on in his recording career the music of Stravinsky and Berlioz, as well as more Mozart. His third productive recording association at this time was with EMI, with whom he intermittently worked until he signed an exclusive agreement with Philips. His recording of Beethoven’s Symphony No 7 with the Royal Philharmonic Orchestra for EMI was one of the most exciting recordings of the early 1960s. Davis’s representation on the Philips label gradually grew to include not only major strands of the symphonic repertoire but also a large number of operatic recordings, featuring Mozart, Berlioz and Britten as might be expected, as well as Verdi and Tippett. Davis’s association with the Bavarian Radio Symphony Orchestra was captured through both studio recordings and broadcasts.

As the recording industry began to contract during the late 1990s, Davis’s associations with Philips and more latterly RCA drew to a close. His recording career however took a massive leap forward with the decision of the London Symphony Orchestra to record its concert performances and to sell these at a bargain price. This astute strategy was rewarded with outstanding success, and was especially enhanced when several recordings, such as Davis’s second recorded account of Les Troyens, enjoyed international acclaim. These releases achieved an excellent balance between the intensity of the live performance and the high standard of sound quality expected of a studio recording.