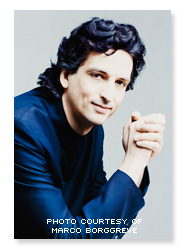 Michael Sanderling began his musical training on the cello at the age of five. After successfully taking part in several competitions, he was engaged by Kurt Masur as principal cellist with the Leipzig Gewandhausorchester in 1987. Sanderling has appeared as soloist with orchestras throughout Europe and the United States, including the Bavarian Radio Symphony Orchestra, the Vienna Symphony, Orchestre de Paris and the Boston Symphony Orchestra. His chamber music partners have included Elisabeth Leonskaja, Julia Fischer, Martin Helmchen and Veronika Eberle. He was member of the Trio Ex Aequo from 1988 to 1996. He ended his career as a cello soloist in 2010 and launched a very successful career as a conductor. He has been principal conductor of the Dresden Philharmonic since the 2011–2012 season.