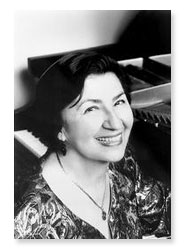 Before immigrating to the US, Bella Davidovich was one of the Soviet Union’s pre-eminent artists as well as one of the few women to be admitted to the inner circle of Russian cultural life. Born in Baku into a family of musicians, she began her piano studies at an early age. At the age of 18 she entered the Moscow Conservatory, and in 1949 she won first prize in the Chopin Competition in Warsaw. During her remarkable career in the former Soviet Union, Bella Davidovich appeared with every major Russian conductor and performed as a soloist with the Leningrad Philharmonic for 28 consecutive seasons. Since moving to the US, Davidovich established herself as one of her adopted country’s most popular artists and is one of the few female pianists to achieve worldwide reputation. In October 1979, her American début at Carnegie Hall before a standing-room only audience, heralded a new chapter in a career of major importance. Throughout her extraordinary career, Bella Davidovich has performed with the world’s leading conductors. She has had tremendous success with recitals at the Concertgebouw Amsterdam and in Lisbon. Davidovich was a member of the faculty of the Moscow Conservatory for 16 years before moving to the West in 1978. As a highly regarded pedagogue, she now concentrates her teaching activities at The Juilliard School in New York. She is also a regular jury member at many of the world’s major international piano competitions. In 1995 she served on the jury of the Queen Elisabeth Competition in Brussels, the Chopin Competition in Warsaw and the Clara Haskil Competition in Vevey/Switzerland. Bella Davidovich has recorded for Philips, Orfeo and Novalis.