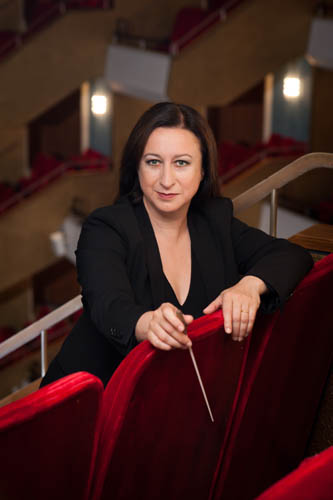 Simone Young is considered one of the most important conductors of our time. After completing her musical studies in her native Sydney, Ms. Young received an award to work at the Cologne Opera where she was quickly appointed as Kapellmeister, and then engaged by Daniel Barenboim at Berlin’s Staatsoper Unter den Linden. This launched her international career, which has taken her to nearly all the most important opera houses and symphony orchestras in the world.

Ms. Young is currently Principal Guest Conductor of the Orchestre de Chambre de Lausanne, and maintains a busy conducting schedule in the 2019/20 season, which saw her return once again to Vienna State Opera with a New Production of A Midsummer Night´s Dream. Elsewhere this season, she will lead performances of Lear at Teatro Real Madrid, Fidelio at the Berlin State Opera and Salome at Oper Zürich. Equally in demand on the concert podium, this season brings Ms. Young to orchestras in Paris, Madrid, New York, San Francisco, Minnesota, Cincinnati, Tokio, Monte Carlo, Leipzig, Helsinki, Barcelona, Manchester, Lausanne and Australia a.o.

During her tenure in Hamburg as Artistic Director of the Hamburg State Opera and Chief Music Director of the Hamburg Philharmonic from 2005-2015, Ms. Young dedicated herself nearly exclusively to that house, conducting a wide range of premieres and a diverse repertoire with performance of such wide-ranging composers as Mozart, Verdi, Puccini, Wagner, Strauss, Hindemith, Britten and Henze. This period was further distinguished by many World and German Premieres, as Ms. Young brought contemporary music to the fore during her tenure with both the State Opera and the Philharmonic in Hamburg.

Ms. Young is well known as a Wagner and Strauss specialist, a reputation she developed early in her career when she conducted multiple complete cycles of Wagner’s “Ring” at the Vienna State Opera and the Staatsoper Unter den Linden in Berlin, as well as his Walküre and Die Meistersinger von Nürnberg along with Strauss’ Elektra, Salome, Die Frau ohne Schatten and Ariadne auf Naxos, along with a new production of Hans Pfitzner’s Palestrina at the Bavarian State Opera. Beyond her numerous performances of Wagner’s and Strauss’ operas on Vienna’s famed Ringstrasse, Ms. Young’s long relationship with the Vienna State Opera, which began with her debut in 1993, includes the widely acclaimed rediscovery of Jacques Fromental Halvey’s La Juive in 1999, along with many of the most famous works of the Italian operatic repertoire. After her responsibilities in Hamburg kept her away for several years, she returned to the the Vienna State Opera in the 2011/12 season with a celebrated revival of of Strauss’s Daphne, and she remains a regular feature of that house’s programming to this day. Outside of Vienna, Ms. Young has appeared as a guest conductor at such world-class opera houses as Opéra National de Paris, the Royal Opera House Covent Garden in London, and the Metropolitan Opera in New York, and she is a regular guest at the major opera houses in Munich, Berlin, Dresden and Zurich.

Alongside her extensive operatic performances, Ms. Young has also made a name for herself as a symphonic conductor. She has worked with many of the world’s leading orchestras, including among many others, the Philharmonic Orchestras of Berlin, London, Munich, New York, and Vienna. Following completion of her tenure in Hamburg, Ms. Young is appearing once again as a regular guest conductor with orchestras around the world, including the Vienna Symphony Orchestra, the Orchestre de Paris, the BBC Symphony Orchestra, the Dresden Philharmonic, the Netherlands Philharmonic and both the Deutsches Symphonie-Orchester and the Konzerthausorchester of Berlin, alongside performances in North America with the Cincinnati and Dallas Symphony Orchestras, and with various orchestras in her native Australia.