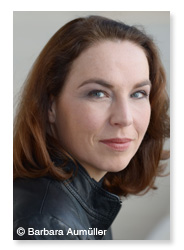 The soprano Britta Stallmeister studied with Carl-Heinz Müller at the Hochschule für Musik, Theater und Medien Hannover, and in 1997 won awards at the Deutschen Musikwettbewerb in Berlin, going on to work with the International Opera Studio of the Hamburg State Opera. As a member of Oper Frankfurt, her repertoire spanned some 50 roles from Monteverdi to Aribert Reimann.

She has made guest appearances at the Semperoper Dresden, the Bayreuth and Salzburg Festivals, and opera houses across Germany. She also enjoys a career in Lieder and concert performance, appearing in concert halls and at festivals in Germany, Austria, Switzerland, Belgium, the Netherlands, Russia and Japan, including the Schleswig-Holstein Musik Festival, Ludwigsburg Festival, Kissinger Sommer and the Schubertiade Schwarzenberg.

She has made many broadcasts and recordings, illustrative of her versatility in repertoire spanning from the Baroque to the contemporary.