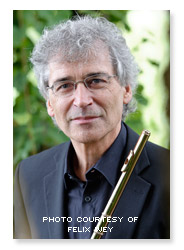 Bruno Meier was born in Switzerland and studied the flute with Andre Jaunet in Zurich, Marcel Moyse at Brattleboro (USA) and Peter-Lukas Graf at the Academy of Music in Basel, where he was awarded a concert diploma with distinction. He went on to work as a lecturer (University of Applied Sciences of Northwest Switzerland) and as principal flautist with a number of well-known chamber orchestras. His concert tours as a soloist and chamber musician have taken him throughout Europe, and to Russia (1982 and 1990), South Africa and Namibia (2009), and Belarus (1996,1997, 1999, 2001, 2003, 2004), where he has held master-classes at the Minsk Academy of Music. Increasingly involved in recording, he has also been active in recent years as a musicologist, researching hitherto unknown works for the flute that he has then gone on to record. The result has been world premiere recordings of flute concertos by Josef Mysliveček, Johann Baptist Vanhal, Franz Krommer, Antonio Rosetti, Joseph Reicha, Friedrich Witt, Peter von Winter, Franz Anton Hoffmeister and Franz Lachner. Together with the Stamitz Quartet, he has recorded the nine flute quintets of Mozart’s contemporary Franz Krommer. His subsequent work with the Stamitz Quartet and the Prague Chamber Orchestra has been acclaimed all over the world. Bruno Meier plays a 14-carat gold flute by Verne Q. Powell (Boston/USA).