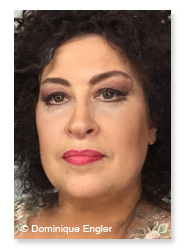 Contralto Renée Morloc studied at the Hochschule für Musik Stuttgart and the Mozarteum Salzburg. She made her opera debut as Erda in Wagner’s Siegfried at the NTM Nationaltheater Mannheim, launching her career as an international opera and concert singer. She has in recent years appeared at La Scala, the Salzburg Festival and Opéra Bastille.

Her opera repertoire includes all dramatic alto roles in operas by Wagner, Strauss and Verdi, and important roles in French, Russian and Czech. On the concert stage her repertoire centres on Mahler’s symphonic works (Das Lied von der Erde, Symphonies Nos. 2, 3 and 8, and the orchestral songs), which she has also recorded.

She is a member of the Rheinoper Düsseldorf and was from 2008 to 2011 a teaching professor at the University of Music in Stuttgart.