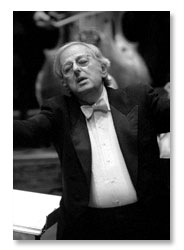 André Previn’s father, Jacob Prewin, was not only a successful lawyer but also a highly gifted amateur musician who from his son’s early years played piano duets with the boy. He took André when he was five to hear the Berlin Philharmonic Orchestra under Furtwängler, and the following year his son entered the Berlin High School for Music, where he studied piano with Rudolf Breithaupt and quickly became a fluent pianist as well as an accomplished musician. With its Russian-Jewish background, the Prewin family was under threat in Nazi Germany and in 1938 it fled to Paris, where André studied briefly at the Paris Conservatoire with Marcel Dupré. A year later the family was on the move once again, this time to America. It settled in Los Angeles, where a relative was head of the music department of Universal Studios in Hollywood. Here Jacob, lacking fluency in the English language, was forced to earn his living as a piano teacher, while André quickly established a reputation as a versatile pianist, equally adept whether playing jazz in night clubs or accompanying silent films in specialist cinemas.

Having become an American citizen in 1943, Previn made two jazz recordings for RCA in 1945 which sold more than two hundred thousand copies. He took composition lessons from Joseph Achron, Ernst Toch and Mario Castelnuovo-Tedesco, and developed a life-long love of chamber music through playing with the violinist Josef Szigeti. After beginning work as an orchestrator for MGM he was soon commissioned to compose music for films, which, following the custom of the time, he was expected to conduct. Previn’s first (uncredited) film score was written in 1948 for a film entitled The Kissing Bandit; this was followed by a steady stream of scores throughout the 1950s and 1960s. To develop his own experience of conducting he would conduct studio musicians in the symphonic repertoire outside of their regular schedule, and he also conducted the California Youth Symphony Orchestra.

Drafted into the United States army in 1950 for two years, Previn served as conductor of the Sixth Army Band. During this period he began to take conducting lessons from Pierre Monteux who was then in charge of the San Francisco Symphony Orchestra, and he continued these for a year after his discharge from the army. Around 1954 Previn decided that he would try to shift the emphasis of his career from its Hollywood slant to a basis in classical music. He began to establish a strong reputation around the Los Angeles area as a ‘straight’ pianist, recording discs of music by composers such as Barber, Hindemith and Frank Martin for CBS. He avoided conducting ‘pops’ concerts with the major American symphony orchestras, which might have been expected given his Hollywood associations, and instead worked with semi-professional and provincial orchestras in order to learn the traditional repertoire. While undertaking this work, his film career nonetheless flourished in no uncertain terms: Previn was awarded Oscars for his musical contributions to Gigi (1958), Porgy and Bess (1959), Irma la Douce (1963) and My Fair Lady (1964), the first and last of which as successful musicals have certainly retained a strong hold on the popular imagination.

Previn’s recording career as a conductor started with two recordings for CBS, made with the St Louis Symphony Orchestra in 1962, of Britten’s Sinfonia da Requiem and Copland’s The Red Pony. These were followed by accompaniments for concerto recordings featuring the American pianists Leonard Pennario and Lorin Hollander with the Royal Philharmonic Orchestra, made for RCA in 1964; and a year later RCA brought him back to London to conduct the London Symphony Orchestra in Shostakovich’s Symphony No. 5 and Tchaikovsky’s Symphony No. 2 ‘Little Russian’. At this time Previn’s film background, relative youth, engaging personality, musical versatility and ‘no-nonsense’ approach to conducting attracted considerable interest. He succeeded Sir John Barbirolli as chief conductor of the Houston Symphony Orchestra in 1967, and in the following year was offered and accepted the post of chief conductor of the London Symphony Orchestra, in succession to István Kertész.

This was a masterly appointment which began the lengthy process of enabling the LSO to differentiate itself from the other London orchestras and to claim a higher overall qualitative standard from its immediate competition. Previn’s ease with the media and the example of Leonard Bernstein in the USA led to a series of extraordinarily popular national television programmes about classical music entitled André Previn’s Music Night. These in turn stimulated high record sales and full houses for the concerts at which conductor and orchestra appeared together. As a result, concerts given by Previn and the LSO became major ‘events’ in the otherwise rather staid landscape of classical music in the United Kingdom. The earnings of the members of the LSO increased appreciably and the orchestra began to develop a reputation as being hard-living and difficult to handle, even if this was not something which Previn himself experienced with them. In the recording studio Previn and the LSO made a notable series of recordings for RCA, including the complete symphonies of Vaughan Williams; and even more impressive were their recordings for EMI, which were superbly engineered and produced to the highest standards, often by Christopher Bishop. These included popular works such as the three major Tchaikovsky ballet scores as well as what was at the time slightly more rarified repertoire: for instance the complete Rachmaninov symphonies, Shostakovich’s Symphonies Nos 6 and 8, Walton’s Symphony No. 2, and Messiaen’s Turangalîla-Symphonie. Meanwhile Previn kept up his piano playing, both in chamber music concerts with members of the LSO and also in concerts and recordings of jazz. Previn ceased to be the LSO’s chief conductor in 1979, becoming instead the orchestra’s conductor emeritus; and while he was to continue to work with major orchestras across the world, he never subsequently developed a relationship with an orchestra to match that which he had enjoyed with the LSO. This change also marked a watershed in the popular acknowledgement of his career: henceforth he became less of a constant fixture in the public eye (certainly in the United Kingdom), and when he did re-appear, his years with the LSO, and especially a famous appearance on the very popular television programme, the Morecambe and Wise Christmas Show, were regular, and perhaps no longer relevant, points of reference.

Previn has composed throughout his career, favouring a light and lyrical style that works well in many different formats. Although when active in Hollywood he gained the most public recognition for his scores for musicals, he also composed the music for two of Hollywood’s most powerful films of the post-war period: John Sturges’s Bad Day at Black Rock and Richard Brooks’s Elmer Gantry. His concert works are numerous: they include the Piano Concerto (1985) written for Vladimir Ashkenazy, the Cello Sonata (1993) for Yo-Yo Ma, the Violin Sonata (1994) for Gil Shaham, and the Violin Concerto (2002) for his fifth wife Anne-Sophie Mutter, as well as numerous vocal works composed for a wide range of singers, although like Richard Strauss he has shown a predilection for the high soprano voice. Previn’s opera A Streetcar Named Desire, based on the play by Tennessee Williams, was first performed with great success under his baton by the San Francisco Opera in 1998; it has subsequently been produced widely and has been issued as a recording by Deutsche Grammophon, for whom Previn records exclusively. His entertaining memoirs of his time in Hollywood, No Minor Chords, appeared in 1991. He received an honorary knighthood (KBE) from Her Majesty Queen Elizabeth II in 1996, and in 1998 was awarded the Kennedy Center Honor for Lifetime Achievement.

On the podium Previn presents a compact figure, whose baton technique is clear, straightforward, and wide in reach. His versatility, his calm and amusing persona, and the ease with which he appears to discharge any musical task, have when taken together perhaps resulted in his undoubted musical gifts being underestimated. Close examination of his recordings, the repertoire of which tends to favour the late-Romantic style with which Previn is closely identified both as a composer and a conductor, shows any such doubt to be unfounded. Previn’s fourth wife, Heather Sneddon, has commented with much truth about both her ex-husband and other, similarly gifted, musicians: ‘The music is the mistress. All these talented people are driven; they don’t have a choice really.’