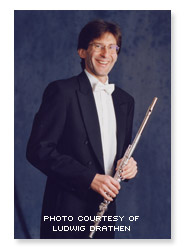 Michael Faust studied the flute with Cäcilie Lamerichs, Karlheinz Zöller and Aurèle Nicolet. He was the first German to be awarded the prestigious Pro Musicis Award 1986 in New York. Since that time he has presented solo concerts throughout Europe, North and South America, Africa and Japan. As a soloist he has played with orchestras such as the NDR Symphony Orchestra Hamburg, the St Louis Symphony, the Gürzenich Orchester and the Bayerische Rundfunkorchester, in halls such as the Concertgebouw Amsterdam, Berlin Philharmonic, Weill Hall, New York, Keio Hall, Tokyo, the Gasteig in Munich, the Cologne Philharmonic and many others. As an orchestral musician he held principal positions in Rome, Hamburg, Stuttgart and with the Munich Philharmonic. Since 1988 he has been the principal flute with the WDR Sinfonieorchester in Cologne. Michael Faust is professor at the Musikhochschule Düsseldorf and gives masterclasses in Europe, South America, Japan and the United States. Mauricio Kagel has written a concerto for him (Naxos 8.572635) and the concerto by Pēteris Vasks, also written for him, had its première in 2009 with the WDR Symphony Orchestra under Semyon Bychkov. In 2011 Michael Faust founded the Gargonza Arts Award for highly talented young artists. Working in different disciplines of arts they spend creative months together in Castello di Gargonza, Italy.