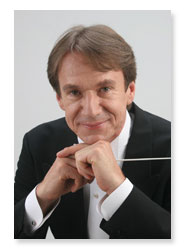 Born in Vienna, Gottfried Rabl studied the piano and graduated in French horn, conducting and vocal coaching at the University of Music in Vienna.

He was awarded a conducting fellowship in Helsinki and led his own highly successful ensemble for avant-garde music, Theatre of Silence, for several years, in which he appeared as conductor, pianist and composer.

He later started a close collaboration with Leonard Bernstein in Vienna, Milan and the United States, during which he served as musical assistant and editor of Bernstein’s last opera, A Quiet Place. He subsequently pursued post-graduate studies for several years at the Indiana University School of Music in the United States, where he became conductor of the local symphony orchestra.