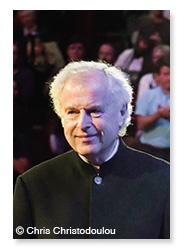 András Schiff’s parents were amateur musicians, although his father died when Schiff was only five years old. As a child, he studied piano with Elizabeth Vadasz, making his public debut at the age of nine; at fourteen he went to the Franz Liszt Academy in Budapest where he studied piano with Pál Kadosa and Ferenc Rados, and chamber music with György Kurtág. During his early teens he spent summers in London attending master-classes given by George Malcolm. Schiff was a prizewinner at both the International Tchaikovsky Competition and the Leeds International Competition in the mid-1970s and exposure at these events led to tours of Europe and the USSR. At his American debut he played Bach’s Keyboard Concerto No. 1 in D minor BWV 1052 and Mozart’s Piano Concerto in E flat K. 449 with the Franz Liszt Chamber Orchestra of Budapest. The following year Schiff moved to New York and he has continued to divide his time between that city, London, Salzburg and Florence.

During the 1980s Schiff played with the world’s greatest orchestras including the Berlin Philharmonic, Vienna Philharmonic, New York Philharmonic and Concertgebouw. At that time he programmed concertos by Tchaikovsky and Grieg, but in solo repertoire Schiff now concentrates on Bach, Schubert, Haydn, Mozart, Schumann and Bartók. He is a brave man to hail from Budapest and yet to state, ‘I feel no sympathy or affection for the music of Liszt.’ Schiff established himself quickly as a thinking pianist in the classic mould of Artur Schnabel and Edwin Fischer. Indeed, Schiff admires pianists of the past, especially Alfred Cortot and Edwin Fischer, as individuals whose whole lives encompassed art, literature and painting as well as music. He also admires Mieczysław Horszowski with whom he spent three summers at the Marlboro Festival in Vermont: Schiff’s playing has the simplicity and insight of Horszowski. In 1985 for the anniversary of Bach’s birth, Schiff played the ‘Goldberg’ Variations BWV 988, complete partitas, French Overture BWV 831, Italian Concerto BWV 971 and four duets in three recitals.

A series of Haydn concerts Schiff gave in London won him the Royal Philharmonic Society/Charles Heidsieck Award for the best concert series of the year, and he was also awarded the Wiener Flötenuhr, the Mozart Prize of the City of Vienna. During the 1990s Schiff was awarded the Claudio Arrau Memorial Medal by the Schumann Society of Düsseldorf and the highest Hungarian honour, the Kossuth Prize. Schiff founded the Musiktage Mondsee near Salzburg and a few years before, with Heinz Holliger, founded the Ittinger Pfingstkonzerte in Kartause Ittingen, Switzerland. Schiff has also formed a chamber orchestra named Capella Andrea Barca, with whom he performs every year in addition to annual performances with the Philharmonia and Chamber Orchestra of Europe.

Schiff has performed with singers Peter Schreier, Barbara Hendricks and Cecilia Bartoli and played chamber music with many quartets including the Takács, Guarneri and Juilliard. More recently he has taken up the baton and conducted performances of Bach’s St Matthew Passion and Mozart’s Così fan tutte. In 2004 Schiff began to perform complete cycles of the piano sonatas by Beethoven and ECM is recording these. In 1998 he gave a Schumann cycle at the Salzburg Festival and appears regularly at many of the most famous music festivals including Edinburgh, Lucerne and Vienna.

Liking to immerse himself in the music of an individual composer, Schiff often gives cycles of works. He keeps his core repertoire of large portions of Bach, Mozart, Schubert and Schumann, but likes to explore other composers, particularly Bartók, and most recently Janáček and Smetana. Schiff uses a Bösendorfer piano for many of his recordings and has a translucent sound, ideal for Bach, Mozart and Mendelssohn, whose Piano Concerto No. 1 in G minor Op. 25 is given a sparklingly light performance in a recording for Decca. His lack of weightiness also makes the Piano Concerto No. 1 by Tchaikovsky pleasantly fresh.

Schiff’s first main recordings were made for Decca, beginning in 1978, when he began to record the complete piano sonatas by Mozart. In the early 1980s he recorded concertos by Mendelssohn, Chopin, Schumann and Tchaikovsky, but his most important recordings are of the major works of Bach, including the complete partitas, English and French Suites, Das wohtemperierte Klavier, the inventions, the ‘Goldberg’ Variations and some of the keyboard concertos. In addition, for Decca he has recorded the complete piano sonatas of Schubert and most of the piano concertos by Mozart with Sándor Végh, as well as music by Scarlatti and Mendelssohn.

From 1994 to 1997 Schiff recorded for Teldec. There are fine recordings of the complete piano concertos by Beethoven, and a two-disc set of piano sonatas by Haydn. Apart from two discs of Schumann’s works, Schiff has recorded an unusual disc of polkas by Smetana, two of Schubert’s piano trios and one of Dvořák’s chamber music with piano. A highlight of his Teldec recordings is that of the complete Bartók piano concertos with the Budapest Festival Orchestra and Iván Fischer. Schiff’s lightness of style and tone make the Piano Concerto No. 2 a far more agreeable experience than that provided by the many performers who pound this work out.

From 1997 Schiff has recorded for ECM. A new live recording of Bach’s ‘Goldberg’ Variations BWV 988 is one of his best, with Schiff focusing less on details and providing a better flow and overall shape to the work than in his earlier recording. In 2000 Schiff recorded more Schumann including the Humoreske Op. 20; and is currently having his live performances of Beethoven’s complete piano sonatas recorded for release.