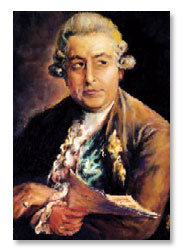 
The youngest son of Johann Sebastian Bach by his second wife, Johann Christian Bach was born in Leipzig in 1735 and on the death of his father in 1750 moved to Berlin to live with his brother CPE Bach. He later travelled to Italy, where he studied with the famous Padre Martini, became a Catholic, and was employed for a short time as organist at Milan Cathedral. In 1762 he moved to London as a composer of Italian opera, like Handel 50 years before him, and enjoyed a considerable reputation there for a number of years, establishing a series of subscription concerts with his colleague Abel. His fame extended both to Mannheim and to Paris, but by the time of his death his popularity in London had waned. His influence on the young Mozart was considerable, and they met both in London and in Paris. He is sometimes known as ‘the London Bach’.

Johann Christian Bach wrote a number of orchestral works, some for the concerts that he organised in the Hanover Square Rooms in London. These compositions included Six Grand Overtures, Op 18 and Six Harpsichord Concertos, Op 7.

Although at one time distinguished as a keyboard player, in London JC Bach claimed to have lost something of his earlier ability. He published, however, a relatively small number of keyboard sonatas, to be played on either the harpsichord or the newly developing fortepiano (and so advertised).