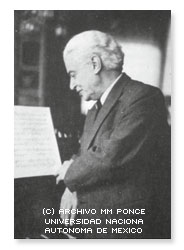 
The Mexican pianist and composer Manuel Ponce studied in Italy and Germany, returning home finally to establish himself as a writer, teacher and composer and a leading figure in the musical life of the country.

Ponce’s characteristically Mexican music includes an important addition to guitar repertoire: his Concierto del sur (‘Concerto of the South’), written for the guitarist Segovia. Two years later, in 1943, he wrote an effective Violin Concerto, in which he makes use of the best known of his songs, the popular Estrellita.

As Kreisler did for the violin, so Ponce wrote a series of pastiche pieces for the guitar, attributing them to various composers of the past (this at the request of Segovia, who needed a more extensive repertoire). His compositions for guitar include sonatas, preludes, and a set of variations with a fugue on the traditional melody La folia.

Ponce’s piano music, coloured by national elements, reflects his own interest in the instrument.