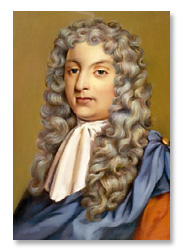 
Henry Purcell was one of the greatest English composers, flourishing in the period that followed the restoration of the monarchy after the Puritan Commonwealth period. He spent much of his short life in the service of the Chapel Royal as a composer, organist and singer. With considerable gifts as a composer, he wrote extensively for the stage (particularly in a hybrid musico-dramatic form of the time), for the church, and for popular entertainment. He was a master of English word-setting and of contemporary compositional techniques for instruments and voices. He died in 1695, a year after composing funeral music for Queen Mary.

Purcell wrote only one full opera, a short work supposedly designed for a girls’ school. The tragic story of Dido and Aeneas, with a libretto by Nahum Tate, has a perfection of its own. Dido’s final lament, before she kills herself, follows the model for such compositions established by Monteverdi 80 years before. Other stage works by Purcell are in the hybrid form now known as semi-opera, combining spoken drama with a musical element that in the concert hall may be performed apart from its wider dramatic context. These semi-operas include King Arthur, with a text by the poet John Dryden, a work that includes fascinating music for a chorus of cold people, frozen by the Cold Genius but thawed by the power of Love. The Fairy Queen, based on Shakespeare’s A Midsummer Night’s Dream, includes an interesting if apparently inappropriate Chinese masque, while The Tempest, again based on Shakespeare, includes songs and dance music of great interest.

Purcell provided incidental music, dances and songs for a great many plays, including Aphra Behn’s Abdelazar or The Moor’s Revenge, a rondeau from which provides the theme for Benjamin Britten’s Young Person’s Guide to the Orchestra.

Purcell provided a number of verse anthems and full anthems for the liturgy of the Church of England as well as settings of the Morning and Evening Service, including the Magnificat, Nunc dimittis, Te Deumand Jubilate. The anthems offer considerable musical interest, exemplified in the verse anthems Rejoice in the Lord alway and My heart is inditing. Other sacred vocal music includes the Latin psalm setting Jehovah, quam multi sunt hostes as well as settings of sacred poems by contemporary writers.

Purcell’s secular vocal music includes a number of odes for the feast of St. Cecilia, patron saint of music, and a number of welcome songs and other celebrations of royal occasions. He wrote a considerable quantity of solo songs, in addition to the songs included in his work for the theatre. These solo songs and the songs for two or more voices offer a particularly rich repertoire, exemplified by ‘Music for a while’, from the play Oedipus, and ‘Man is for a woman made’, from The Mock Marriage. Other vocal works include a number of catches (rounds for popular entertainment).

Instrumental music by Purcell, in addition to the theatre music, includes sets of fantasias for viols and two sets of trio sonatas.

Although Purcell was employed for over half his life as an organist of the Chapel Royal and at Westminster Abbey, he wrote relatively little for the instrument. His harpsichord music includes a number of suites, some of which include transcriptions of his own theatre music.