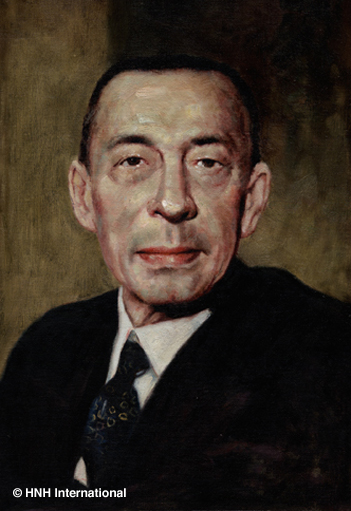 
After study at the St Petersburg and Moscow Conservatories, Sergey Rachmaninov embarked on a career in Russia as a composer, pianist and conductor. Exile from his own country after the Communist Revolution of 1917 forced an increased concentration on performance as one of the most distinguished pianists of the day, activity that enabled him to support his family but left less time for his work as a composer. For practical reasons he eventually based himself in the United States, while keeping a villa in Switzerland. He died in Beverly Hills in 1943.

The second of Rachmaninov’s four piano concertos holds an unchallenged position among Romantic works in this form, its popularity closely rivalled by the Rhapsody on a Theme of Paganini for piano and orchestra. While the Symphonic Dances of 1940 enjoy some popularity, as well as the symphonic poem The Rock and the dark-hued Isle of the Dead, with its recurrent motif from the Latin Requiem Mass, the second of his three numbered symphonies is still more familiar. His First Symphony had a disastrous first performance under Glazunov in 1897 but has more to recommend it than critics of the time suggested. Of the other piano concertos, the first, written while he was still a student, proved effective enough; the third, technically demanding for the performer but popular with audiences, is more organically structured than the second; and the fourth, composed abroad in 1926 and revised in 1941, has never found a significant place in solo repertoire.

Rachmaninov’s Prelude in C sharp minor won early popularity that largely outweighed its merits. Other piano works include the Études-tableaux of 1911 and 1916–17, two sonatas, sets of preludes and moments musicaux, transcriptions (including the two Kreisler pieces Liebesleid and Liebesfreud), and the impressive Variations on a Theme of Corelli (his last original composition for solo piano, composed in 1931 and based on the popular Baroque dance theme of La folia, also used by Corelli in a violin sonata).

Rachmaninov, in his earlier career, wrote a small number of works for instrumental ensemble. Notable among these are the compositions for cello and piano dedicated to Tchaikovsky’s friend, the cellist Anatoli Brandukov. They include a fine sonata as well as the Prelude and Danse orientale that form Opus 2. His Vocalise, originally just that (a wordless song), is also a familiar element in cello repertoire. The second of his two Trios élégiaques, written in 1893, a year after the first, mourns the death of Tchaikovsky.