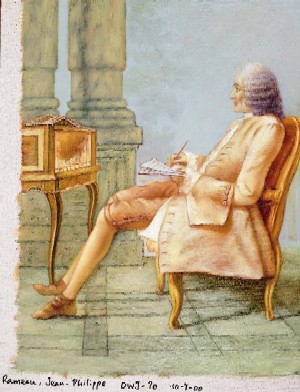 
Rameau was the leading French composer of his time, particularly after the death of Couperin in 1733. He made a significant and lasting contribution to musical theory. Born in Dijon, two years before the year of birth of Handel, Bach and Domenico Scarlatti, Rameau spent the earlier part of his career principally as organist at Clermont Cathedral. In 1722 or 1723, however, he settled in Paris, publishing further collections of harpsichord pieces and his important Treatise on Harmony, written before his removal to Paris. From 1733 he devoted himself largely to the composition of opera and to his work as a theorist, the first under the patronage of a rich amateur, in whose house he had an apartment.

Rameau contributed to a variety of dramatic forms, continuing, in some, the tradition of Lully. These included tragédies lyriques, comédies lyriques and comédies-ballets. His first success in 1733 was Hippolyte et Aricie, but as time went on fashions changed and the stage works he wrote after Les Paladins in 1760 remained unperformed. Orchestral suites derived from some of Rameau’s stage works at least make a certain amount of this music readily available.

Sixty of Rameau’s 65 harpsichord pieces were written by 1728, with a final group appearing in 1741. Published in 1706, 1724 and around the year 1728, these collections, with the final collection of 1741, consist of genre pieces and dances in the established tradition of French keyboard music.

In the later part of his career Rameau also wrote a series of suites, the Pièces de clavecin en concerts, for harpsichord, flute or violin and second violin or tenor viol.