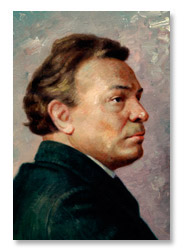 
The Italian composer Ottorino Respighi studied music in his native Bologna and later, briefly, with Rimsky-Korsakov in St Petersburg. A viola player and pianist as well as a composer, he settled in Rome in 1913, earning a reputation also for his interest in early music and for his work as a teacher.

As befits an Italian composer, Respighi also wrote music for the theatre, some nine operas and two ballets. These include La bella dormente nel bosco (‘Sleeping Beauty’), originally for marionettes and then a children’s mime. His last opera, completed after his death by his wife, was Lucrezia.

Respighi is chiefly known for his vivid symphonic poems, in particular Fontane di Roma (‘Fountains of Rome’), Pini di Roma (‘Pines of Rome’) and Feste romane (‘Roman Festivals’), the last even more a celebration of the revived spirit of nationalism in the Italy of his time. Concertos for violin and for piano occupy a lesser position in general repertoire. Other orchestral compositions include Trittico botticelliano (‘Triptych after Botticelli’) and music from his opera Belfagor.

Respighi’s gifts for vocal writing are seen in a number of works, including Aretusa, La sensitiva and Il tramonto (all settings of Shelley), La primavera, and his songs based on traditional Armenian poems.

Respighi’s La Boutique fantasque, based on Rossini, is well known to ballet audiences. Other orchestral arrangements include Antiche danze ed arie per liuto (‘Ancient Dances and Airs for Lute’) and Gli uccelli (‘The Birds’), based on compositions by Rameau, Pasquini and others.

Respighi’s gifts as a pianist were idiosyncratic, but he wrote and arranged a certain amount of music for piano and for organ, some of the former to suit his own technique.