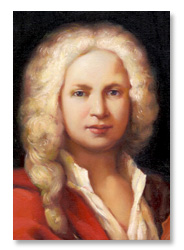 
The Italian composer and violinist Antonio Vivaldi was born in Venice in 1678 and after his ordination in 1703 embarked on an intermittent career in the service of the Ospedale della Pietà, an institution for the education of orphan, illegitimate or indigent girls. It was an establishment with a formidable musical reputation. His later career brought involvement in opera. As a composer Vivaldi was prolific, with some 500 concertos to his credit in addition to a quantity of works for the church and for the theatre. He left Venice in 1741 in the apparent hope of finding new patrons in Vienna, but he died shortly after his arrival in the city.

The surviving church music of Vivaldi includes the well-known Gloria, in addition to a number of settings of psalms and motets.

None of the 50 or so operas of Vivaldi remain in standard repertoire, although some are now once again making their appearance.

The most famous of all Vivaldi’s concertos are those of Le quattro stagioni (‘The Four Seasons’), characteristic compositions to which the composer attached explanatory programmatic sonnets. These four concertos, for solo violin, string orchestra and harpsichord, form part of the collection Il cimento dell’armonia e dell’invenzione (‘The Contest of Harmony and Invention’), one of seven collections of such compositions published in the composer’s lifetime. In addition to concertos for solo violin, Vivaldi also wrote concertos for many other solo instruments, including the flute, oboe, bassoon, cello and viola d’amore, and for groups of solo instruments.

Vivaldi wrote a number of sonatas and trio sonatas, many of them designed for one or two violins and basso continuo. He also wrote a series of chamber concertos, compositions similar in approach to the solo and multiple concertos but scored for smaller groups of instruments.