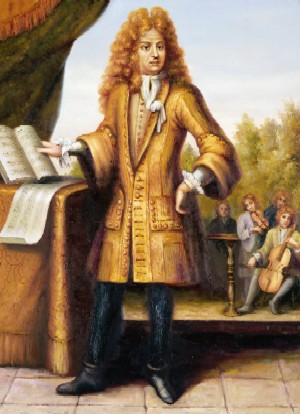 
Italian by birth, Lully made his career in France, where he rose from the position of a page to Mlle de Montpensier to that of Composer of the King’s Music, Master of Music to the Royal Family, and to a position of complete control of all musical performances that involved singing throughout. He collaborated with Molière and with Corneille, and, more particularly, with the poet Quinault, creating comédies-ballets and tragédies lyriques, in both of which there was an element of dance (a French royal preoccupation). The most important French composer of his period, his development of the French overture—with its introductory, slow dotted rhythms and ensuing fugal section—was influential, as was his insistence on orchestral discipline, particularly in the matter of string bowing.

The tragédies lyriques of Lully exercised a strong influence over French opera in his lifetime and in the years that followed his death in 1687. These works are usually treatments of subjects drawn from classical mythology. With changes of fashion, they are rarely heard nowadays in the theatre, although overtures and dances from the operas may appear in instrumental programmes. The comédies-ballets, in the creation of which Molière was a junior partner, are now generally performed without the music and ballet that were essential elements in the original works (although the music for Le Bourgeois gentilhomme may be better remembered).

Lully was also influential in the choice of music and musicians for the royal chapel. His compositions for the church include a number of motets: some six grands motets and 14 petits motets. Examples of the first are the fine setting of the Dies irae from the Requiem Mass for double choir, the Te Deum, and the Miserere, the last a favourite of the King. Examples of the second are his settings of the Vespers Psalm Dixit Dominus, the Anima Christi and the Regina coeli.

Instrumental works by Lully include various sets of dances from his stage works and 18 Trios pour le coucher du Roi.