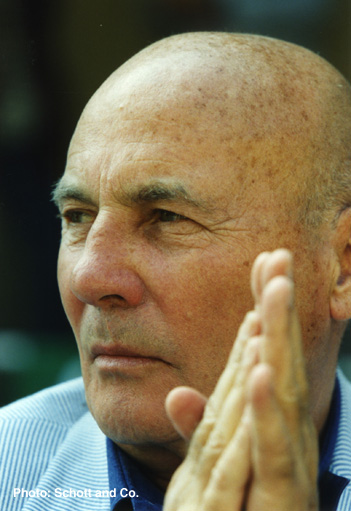 
Hans Werner Henze is among the most prolific and successful of contemporary German composers. His systematic study of music only began after the war, with Wolfgang Fortner, and later with visits to Darmstadt and absorption of serial technique, to be used with great originality in a musical language that was also influenced by Stravinsky. In 1953 he moved to Italy and gradually developed his leaning towards the political New Left, reflected in some of his music and choices of texts and themes. His activities at Montepulciano and his involvement with the Munich Biennale, among other things, have enabled him to exercise a strong influence on the course and promotion of contemporary music.

Henze’s immensely successful operas range from the 1951 Kafka radio opera, with its Trakl settings, Ein Landarzt (‘A Country Doctor’) to König Hirsch (‘King Stag’), Der Prinz von Homburg (after Kleist), Elegy for Young Lovers (with a libretto by W.H. Auden and Chester Kallmann), Der junge Lord (‘The Young Lord’), The Bassarids (with Auden and Kallmann, based on Euripides), and We Come to the River and The English Cat, with texts by Edward Bond. Der verratene Meer (‘Treacherous Oceans’), based on Yukio Mishima’s Gogo no eiko, translated as The Sailor who fell out of Grace with the Sea, had its premiere in 1990, to be followed by Venus and Adonis, L’Upupa und der Triumph der Sohnesliebe (‘The Hoopoe and The Triumph of Filial Love’ – an Arabian fairytale), and, in 2007, Phaedra, a reworking of the tragedy of Phaedra and her stepson Hippolytus. Henze has also provided music for a series of ballets, with incidental music for the cinema and the theatre.

An exceptionally wide range of orchestral music includes 10 symphonies, with a seventh drawing on Hölderlin and an eighth on Shakespeare’s A Midsummer Night’s Dream. Henze has written concertos for piano, for violin and, for Gary Karr, a Double Bass Concerto, as well as a Double Concerto for oboe and harp for Heinz and Ursula Holliger.

In addition to his string quartets Henze has written music for a variety of ensembles, including sonatas for violin, for viola and for flute (all with piano). Music for solo instruments includes the useful Lucy Escott Variations for harpsichord, works for violin, double bass, cello, marimba and trumpet, as well as a set of pieces for solo guitar. These last include his two Royal Winter Music sonatas, with movements based on characters from Shakespeare.

Vocal and choral music by Henze is equally varied and remarkable. It includes Novae de infinito laudes (‘New Praises of the Infinite’), with a text from Giordano Bruno; the Muses of Sicily, after Virgil; the controversial Das Floss der ‘Medusa’ (‘The Raft of the Medusa’); and the revolutionary El Cimarrón (‘The Fugitive’).