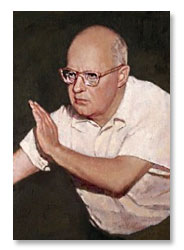 
Respected as one of the most distinguished viola players of his time, Hindemith devoted the earlier part of his career to performance, first as a violinist and then as a viola player in the Amar-Hindemith Quartet, while developing his powers as a composer and his distinctive theories of harmony and of the place of the composer in society. His name is particularly associated with the concept of Gebrauchsmusik, and the composer as craftsman. He was prolific in composition and wrote music in a variety of forms. Attacked by the National Socialists, he left his native Germany in 1935, taking leave from the Berlin Musikhochschule where he had served as professor of composition for some eight years. In 1940 he settled in the United States, teaching at Yale University, a position he combined after the War with a similar position at the University of Zurich. He died in his native city of Frankfurt in 1963.

Hindemith found himself in open conflict with the National Socialist government of Germany in 1934 with his opera Mathis der Maler, the banning of which brought about the resignation of the conductor Furtwängler from his official positions. He derived a symphony of the same title from the opera. The dance legend Nobilissima visione, based on the life of St Francis of Assisi and first performed in London in 1938, is better known in occasional instrumental excerpts, although there is a concert suite from the work.

In addition to the ‘Mathis der Maler’ Symphony, the Symphonic Metamorphoses after Themes by Carl Maria von Weber is in general repertoire. Hindemith wrote concertos for various solo instruments. Of these the concertos for his own instrument, the viola, are notable, in particular the attractive Der Schwanendreher (‘The Swan-Drover’), based on folksongs, and Kammermusik No. 5 for viola and chamber orchestra.

Among the various duo sonatas written by Hindemith, some of those for violin and piano and for viola and piano are of particular interest. The sonata repertoire provided for tuba, double bass, horn, harp, trumpet, viola d’amore, cor anglais and other instruments is of interest, as are the three organ sonatas.

Apart from his three piano sonatas and sonatas for two pianos and for piano duet, Ludus tonalis is Hindemith’s most ambitious work for piano – a set of fugues and interludes through the keys, in the manner of J.S. Bach, preceded by an introduction that is inverted in the conclusion.