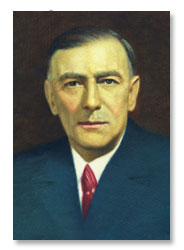 
The Polish composer Karol Szymanowski was born in the Ukraine, once part of the kingdom of Poland, but studied in Warsaw; he was much influenced by Chopin and then by Wagner, Richard Strauss, Brahms and Reger. From a well-to-do and cultured family, he read widely, particularly between 1914 and 1917 when he remained on the family estate in the Ukraine (a property then destroyed in the Civil War). The breadth of his cultural knowledge is reflected in his music and in particular in his settings of a variety of literary texts. Musically he is able at times to draw on specifically Polish material, and on his own perceptions of Arabic and Persian culture.

Stage Works
The principal opera of Szymanowski is King Roger, a work influenced by the Bacchae of Euripides. Here Dionysus returns to similar effect in medieval Sicily. The ballet Harnasie won some success at its first performance in Prague, followed by performance in Paris.

Vocal Music
A number of Szymanowski’s compositions rely on texts, from his 1906 Salome (a fashionable subject), Penthesilea, Love Songs of Hafiz, the Third Symphony (with its ‘Song of the Night’ from Jalāl ad-Dīn ar-Rūmī), Songs of a Fairy-Tale Princess and Songs of the Infatuated Muezzin to the Stabat mater, the Veni creator and the 1933 Litany of the Virgin. Some of Szymanowski’s songs that appear as works for voice and orchestra also exist in a parallel form with piano accompaniment. His settings otherwise range from the literary to the reworking of folksongs.

Orchestral and Chamber Music
Szymanowski’s purely orchestral works include two violin concertos and four symphonies, the last in the form of a sinfonia concertante for piano and orchestra. Most of his chamber music is for violin and piano. Among the best known of these smaller-scale works are Myths for violin and piano (comprising three pieces: The Fountain of Arethusa, Narcissus and Dryads and Pan), a Violin Sonata, Nocturne and Tarantella and a Romance. His two string quartets are performed less often.