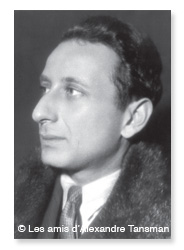 
Polish by birth, Alexandre Tansman settled in France, which had an impact on his music. A wartime period spent in the United States brought closer association with Stravinsky, who influenced his early work and with whom he shares a certain stylistic eclecticism.

Orchestral and Instrumental Music
Tansman won wide success with his two piano concertos of 1926 and 1927 respectively. A pianist himself, he also wrote a Concertino for the instrument. His other concertos include works for viola, clarinet and cello, and a Concertino for flute. The first of his seven symphonies was written in 1925 and later works include the Concerto for Orchestra and his final tribute to Stravinsky, the Stèle in memoriam Igor Stravinsky of 1972. Other instrumental music ranges from string quartets to music for solo guitar.