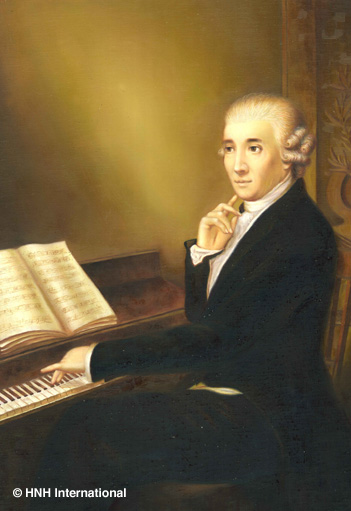 
Various musical paternity charges have been levelled at the composer Franz Joseph Haydn. His career coincided with the development of Classical style and forms (the symphony, sonata, string quartet and other instrumental forms), in the moulding of which he played an important part. Born in Rohrau in 1732, the son of a wheelwright, he was trained as a chorister at St Stephen’s Cathedral in Vienna, where he made his early living before his appointment to the small musical establishment of Count Morzin in 1759. In 1760 he entered the service of the Esterházy Princes, and he succeeded to the position of Kapellmeister on the death of his predecessor and immediate superior Gregor Werner in 1766. Much of Haydn’s life now centred on the magnificent palace and estate at Eszterháza, where his employer Prince Nikolaus Esterházy had moved his entourage for most of the year. The death of the Prince in 1790 released Haydn and allowed travel to London. There followed further service to the successors of Prince Nikolaus, now at the former residence at Eisenstadt, until his retirement in Vienna, where he died in 1809, as the soldiers of Napoleon again entered the city.

Haydn’s duties as Kapellmeister to the Esterházy family involved the provision of church music, as well as music for entertainment. The Mass settings composed for the younger Prince Nikolaus include the well-known ‘Nelson’ Mass (Missa in angustiis), written at the time of Nelson’s victory over Napoleon’s fleet at Aboukir Bay in 1798 and perhaps heard by Nelson and Lady Hamilton during their visit to Eisenstadt in 1800. Between 1796 and 1802 Haydn wrote five other Mass settings, known by their nicknames: ‘Heiligmesse’, ‘Paukenmesse’, ‘Theresienmesse’, ‘Schöpfungsmesse’ and ‘Harmoniemesse’.

Haydn’s two dozen operas have received rather less attention than many of his other works. Most of these were written for performance at Eszterháza, either in the principal theatre or in the marionette theatre. They include Il mondo della luna (‘The World of the Moon’), with a libretto by Goldoni, the same writer’s Lo speziale (‘The Apothecary’), and a setting of Metastasio’s L’isola disabitata (‘The Uninhabited Island’).

Haydn wrote a number of songs, providing nearly 400 British folksong arrangements for the Edinburgh publisher Thomson, in addition to songs and cantatas in German and English. The two sets of canzonettas written in England in 1794 and 1795 include settings of verses by the wife of Haydn’s London surgeon, Hunter.

Haydn’s 108 symphonies, written between 1759 and 1795, range from works written for the relatively modest local court orchestra of two oboes, two horns and strings, to the greater complexity of his larger scale ‘London’ Symphonies (the 12 written for performance in London under the direction of the German-born violinist and impresario Salomon during the composer’s two London visits). The ‘London’ Symphonies include a number of works with nicknames: No. 94, ‘The Surprise’; No. 96, ‘The Miracle’; No. 100, ‘Military’; No. 101, ‘The Clock’; No. 103, “Drumroll”; and No. 104, ‘London’ or ‘Salomon’. Other named symphonies that remain in regular concert repertoire include No. 92, ‘Oxford’, and Nos. 82, ‘The Bear’; 83, ‘The Hen’; and 84, ‘The Queen’ (of France). Earlier named symphonies include the interesting Symphony No. 22, ‘The Philosopher’, which includes two cor anglais or English horns (tenor oboes in place of the normal higher-pitched instrument), which was written in 1764, three years after ‘Le Matin’, ‘Le Midi’ and ‘Le Soir’ (Nos. 6, 7 and 8). The ‘Farewell’ Symphony, No. 45, allows players, impatient for a return from Eszterháza to their families at home, to leave the platform one by one. Its immediate predecessor is the ‘Trauersinfonie’ (‘Mourning Symphony’), while No. 49, ‘La Passione’, reflects elements of Sturm und Drang (‘Storm and Stress’)—the movement in German literature and art of the period.

Of Haydn’s concertos, the work written in 1796 for the newly developed and soon to be obsolete keyed trumpet, is the best known, closely rivalled by the two surviving cello concertos, in D and in C. Three genuine violin concertos remain, in G, C and A, and one horn concerto. The keyboard concertos have recently entered popular repertoire, in particular the Concerto in D major. These were originally designed either for organ or harpsichord and were written in the earlier part of Haydn’s career, before his employment by the Esterházys.

Haydn was a prolific composer of chamber music, and he wrote a considerable number of compositions for his principal patron, Prince Nikolaus Esterházy, who played the baryton. This was a bowed string instrument resembling a viola da gamba, with sympathetic strings that could also be plucked. The English scholar Dr Burney suggested it as only useful on a desert island, where a player could accompany a bowed melody with plucked accompaniment, without other assistance.

For the more conventional string quartet Haydn wrote some 67 works, described originally as divertimenti but later dignified by the more serious title by which they are generally known. Once again nicknames reflect the continued popularity of many of these works. Sets of named quartets include the ‘Sun’ Quartets, Op. 20 of 1772, the ‘Russian’ Quartets, Op. 33 of 1781 (which include ‘The Joke’ and ‘The Bird’), and the ‘Prussian’ Quartets, Op. 50 of 1787, much influenced by Mozart and including ‘The Frog’. There are three sets of ‘Tost’ Quartets, Opp. 54, 55 and 64, bearing the name of the Eszterháza violinist-turned-businessman Johann Tost. The ‘Tost’ Quartets include ‘The Razor’ and ‘The Lark’. Further sets of quartets were issued in 1793 and 1797—the ‘Apponyi’, Opp. 71 and 74 (including ‘The Rider’), and the ‘Erdödy’, Op. 76 (including the ‘Fifths’, ‘Emperor’ and ‘Sunrise’)—both groups bearing the names of aristocratic patrons. The Opus 1 Quartets were seemingly written between 1757 and 1761. The Seven Last Words of Christ on the Cross, written for performance in Cádiz on Good Friday 1787, was arranged in string quartet form from the original work for full orchestra (itself later amplified with the addition of choral parts).

In addition to a number of works for two violins and cello and 126 baryton trios, Haydn wrote a number of attractive piano trios between 1784 and 1797. The best-known of these is the G major Trio with its so-called ‘Gypsy’ rondo.

Haydn composed nearly 50 keyboard sonatas, the earlier intended for harpsichord and the last for the newly developed hammer-action fortepiano. The final works in this form include the so-called ‘English’ Sonata in C major, written in 1795 during Haydn’s second visit to London.

To commemorate the 200th anniversary of Haydn’s death in 1809, Naxos issued special box sets of his complete piano sonatas, string quartets, symphonies, and concertos.  These special box sets bring together acclaimed performances and have been critically praised: “Without the slightest hesitation, I can state that never in the history of recorded music has there been an offering of such value and artistic and technical excellence as is this Haydn bicentennial celebration series.  Other labels have had their Bach, Mozart and Beethoven commemorative series, but at premium prices and not nearly as elegantly nor conveniently packaged as are these treasures from Naxos, which is now the uncontested world leader in affordable classical music recordings.” – Giv Cornfield, PhD, The New Recordings