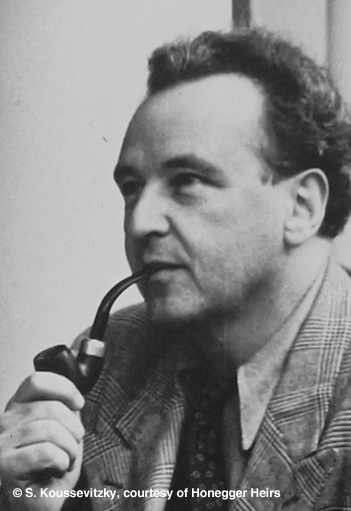 
Swiss by nationality, Arthur Honegger was born and died in France, and was for a time associated with the group of Paris composers known as Les Six, although they were not bound together by ideals such as those of The Five in 19th-century Russia. Honegger was a prolific composer in many genres, writing for the theatre and concert hall, as well as for the cinema.

Honegger made some impression with his three ‘symphonic movements’, the first of a railway engine, Pacific 231, followed by Rugby, and the third with the simple title Mouvement symphonique. Works of particular interest include the delightful Piano Concertino, the Concerto da camera for flute, cor anglais and strings, and the charming Pastorale d’été, scored for chamber orchestra. The second and third of his five symphonies form a more or less regular part of present concert repertoire.

Honegger’s music for the cinema includes a score for Abel Gance’s Napoléon and for Raymond Bernard’s 1934 adaptation of Victor Hugo’s Les Misérables, with Harry Baur as Jean Valjean.

The dramatic psalm Le Roi David, completed in 1921, is an impressive work, originally theatrical in intention but transferred effectively to the concert hall as an oratorio. Honegger’s stage oratorio Jeanne d’Arc au bûcher (‘Joan of Arc at the Stake’), completed in 1935 and using a text by Paul Claudel, is an equally moving work, powerful in its use of the human voice whether in speech or song.