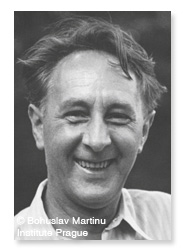 
Born in a church tower in the Bohemian country town of Polička, Bohuslav Martinů was a prolific enough composer as a child, before he entered Prague Conservatory as a violin student in 1906. His interest, however, lay in composition. Failing to complete his course at the Conservatory or at the Prague Organ School, to which he had been transferred, he worked as an orchestral player before moving, in 1923, to Paris. The approach of the German armies in 1940 forced him to make his way, as best he could, to the United States, where he was encouraged by commissions from Koussevitzky. Political events in Czechoslovakia prevented his intended return after the war; he spent his final years abroad, dying in Switzerland in 1959.

Stage Works
Martinů was an immensely prolific and varied composer. His 16 operas include The Greek Passion after Kazantzakis, Ariadne after Neveu, and the radio opera Comedy on the Bridge. Ballet scores include Špalíček, based on fairy-tales and nursery rhymes.

Orchestral Music
An impressive list of orchestral compositions includes six symphonies, the first of them written for Koussevitzky, who commissioned one a year. There are concertos for a variety of instruments, including five for piano and a useful Rhapsody-Concerto for viola and orchestra. The variety of his terms of reference may be seen in his Frescos of Piero della Francesca, The Parables and his earlier Villa by the Sea, based on the evocative painting of Böcklin. His Czech origins are generally identifiable in his music, which nevertheless reflects the influence also of France while returning at times to earlier musical traditions.

Chamber Music
There is a bewilderingly large amount of chamber music by Martinů: duos, trios, quartets, quintets, sextets, septets, octets and nonets. Among these the seven string quartets deserve particular mention, in addition to the works for violin and piano and three cello sonatas.

Keyboard Music
In addition to a large number of shorter piano pieces of all kinds, Martinů wrote a Fantaisie and other pieces for two pianos, as well as music for harpsichord, leaving his organ Vigilia unfinished at the time of his death in 1959.

Choral and Vocal Music
Choral works by Martinů include the remarkable oratorio Gilgameš, based on the ancient Babylonian epic of that name. There are choral works of biblical derivation and a number of choral arrangements of traditional Czech, Slovak and Moravian material. His songs include Magic Nights, settings of poems translated from the Chinese.