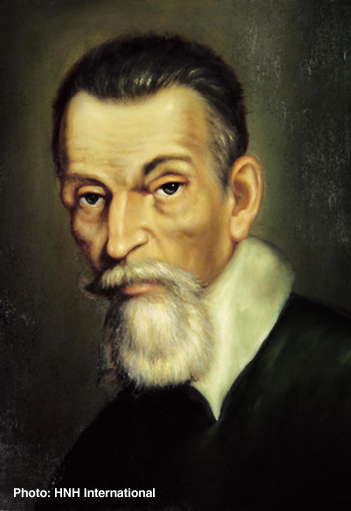 
Born in Cremona in 1567, Claudio Monteverdi served at the court of the Dukes of Mantua from the early 1590s until 1612, when he moved to Venice as maestro di cappella at the basilica of St Mark, a position he retained until his death in 1643. His importance as a proponent of the so-called seconda prattica, the new concerted music characteristic of the early Baroque, is unquestioned, as is his pre-eminence in the development of the new form of opera that sprang from the combination of music and rhetoric in the art of Italian monody.

Monteverdi’s L’Orfeo is the earliest opera to retain a place in modern repertoire. It is a dramatic version of the story concerning the legendary Orpheus—the musician who sought to bring his beloved Eurydice back from the Underworld by the power of music. This was written for the court of the Duke of Mantua in 1607, with a libretto by Alessandro Striggio. A second opera of the period, L’Arianna, deals with the fate of the Cretan princess Ariadne, deserted on the island of Naxos by the Athenian prince, Theseus, whom she had rescued; this work is lost, although the famous ‘Lament of Arianna’ survives both as a solo song and in the form of a madrigal. The words are by the Florentine nobleman Ottavio Rinuccini, who provided the text for the ballet Il Ballo dell’ingrate. Combattimento di Tancredi e Clorinda (‘The Combat of Tancredi and Clorinda’), a setting of an episode in Tasso’s Gerusalemme liberata, allows Monteverdi to exhibit his newly developed stile concitato (agitated style) in an interpretation of ancient Greek philosophical principles expressed by Plato. To stile concitato is added stile molle (soft style) for humility and stile temperato (moderate style) to represent that human emotional state. Monteverdi’s last two surviving operas are Il ritorno d’Ulisse in patria (‘The Return of Ulysses to his Native Country’), staged in Venice in 1640, and the final L’incoronazione di Poppea (‘The Coronation of Poppaea’) of 1642, set in imperial Rome in the time of Nero, whose love for the courtesan Poppaea is the subject of the opera.

Monteverdi published several collections of songs and madrigals. Of these the ‘Lament of Arianna’ has been mentioned, while Combattimento di Tancredi e Clorinda was also published in a set of Madrigali guerrieri et amorosi (‘Madrigals of War and of Love’) designed for singing without dramatic action. This particularly rich repertoire of vocal music includes the duet, also in the form of a five-part madrigal, Zefiro torna (‘Zephyr, turn’), from Petrarch, and Ecco mormorar l’onde (‘Lo the murmur of the waves’), a setting of Tasso. These and other songs and madrigals by Monteverdi were brought to modern attention by the French composer, teacher and musicologist Nadia Boulanger in memorable realisations and recordings in the 1940s.

Possibly as an advertisement of his varied abilities as a composer, Monteverdi wrote in 1610 a setting of the service of Vespers for the Blessed Virgin Mary. It was in the modern style that would appeal to the officials of St Mark’s in Venice. At the same time, perhaps with a view to possible employment in the more conservative papal service in Rome, he wrote a six-voice Mass setting in the old style. The Vespers offers a dramatic and colourful exploitation of the possibilities of the new style. It is a work of great variety and interest, and well suited to the spacial effects available to performers in the great basilica of St Mark, with its galleries and traditions of writing for contrasted groups of performers spacially separated.