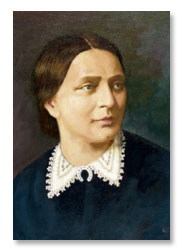 
The daughter of Friedrich Wieck, her teacher and mentor until her marriage with Robert Schumann, Clara Schumann had embarked on a successful career as a pianist before her liaison with Schumann, leading to their marriage in 1840. She continued her international career as a performer and supported her young family after her husband’s final insanity and death in 1856. She was helped after this by Brahms, to whom Schumann had given considerable encouragement.

Clara Schumann wrote a small number of works for orchestra and instrumental ensemble. These included an early piano concerto and a later piano concertino.

The greater part of Clara Schumann’s music for piano was written before her marriage. Her only sonata, however, came about as a present to her husband.