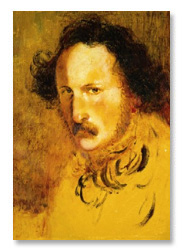 
A native of Bergamo, Donizetti was, for nearly a decade after the early death of Bellini in 1835, the leading composer of Italian opera. He had his first success with Zoraida di Granata in 1822. There followed a series of nearly 60 more operas and a move to Paris, where Rossini had been induced to settle to his profit. His final illness confined him to a hospital in France for some 17 months before his return to Bergamo, where he died in 1848. Donizetti was not exclusively a composer of opera; he wrote music of all kinds – songs, chamber music, piano music and a quantity of music for the church.

The opera Anna Bolena, which won considerable success when it was first staged in Milan in 1830, provides a popular soprano aria in its final ‘Piangete voi?’, while ‘Deserto in terra’, from the last opera, Dom Sébastien, staged in Paris in 1843, has been a favourite with operatic tenors from Caruso to Pavarotti. The comedy Don Pasquale, staged in Paris in 1843, is a well-loved part of standard operatic repertoire, as is L’elisir d’amore (‘The Elixir of Love’), from which the tenor aria ‘Una furtiva lagrima’ (‘A hidden tear’) is particularly well known. Mention should be made of La Favorite and La Fille du régiment (‘The Daughter of the Regiment’), both first staged in Paris in 1840 and sources of further operatic recital arias. The second of these was revised for Milan under the title La figlia del reggimento. Lucia di Lammermoor, based on a novel by Sir Walter Scott, provides intense musical drama for tenors in the last act with ‘Tomba degl’avei miei’ (‘Tomb of my forebears’), and for the heroine in her famous mad scene.

Donizetti’s orchestral music dates largely from his earlier years. It includes symphonies and concertos written in adolescence but showing the extent of his early gifts.

Donizetti’s many songs demonstrate his particular gift for melody, exemplified also, of course, in his operas.