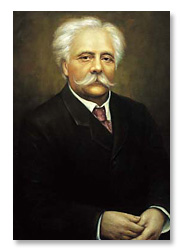 
In the rigid official musical establishment of Paris in the second half of the 19th century Gabriel Fauré won acceptance with difficulty. He was a pupil of Camille Saint-Saëns at the École Niedermeyer and served as organist at various Paris churches, including finally the Madeleine, but had no teaching position until 1897, at the Conservatoire, where his pupils included Ravel and Enescu. In 1905 he became director of the Conservatoire in the aftermath of the scandal of the Prix de Rome being refused to Ravel, and he introduced a number of necessary reforms. He retired in 1920, after which he was able to devote himself more fully again to composition, producing notably two final chamber works: a Piano Trio and a String Quartet. He died in Paris in 1924.

In 1893 Fauré wrote incidental music for a production of Molière’s Le Bourgeois gentilhomme. The Sicilienne for this production was later used again in incidental music for Maeterlinck’s Pelléas et Mélisande and later still won popularity in a variety of arrangements, including the composer’s own orchestral version and an arrangement for violin, or cello, and piano. There is a concert suite from Pelléas et Mélisande, orchestrated by Fauré’s pupil Koechlin.

Fauré’s nostalgic Pavane is an orchestral work with an optional chorus part (added at the suggestion of a patron but generally omitted in modern performance). Music for solo instrument and orchestra includes the Ballade for piano and orchestra, the Berceuse for solo violin and the Élégie for solo cello. The Dolly suite of piano duets was arranged for orchestra in 1906 by Henri Rabaud.

Fauré is a song composer of major importance, capturing in his settings the spirit of his time – the mood of nostalgic yearning for the unattainable. Some of the songs, such as Après un rêve (‘After a Dream’) have achieved even wider popularity in instrumental transcription. In addition to individual songs of great beauty (Lydia, Clair de lune, Les Roses d’Ispahan, Sylvia, En Prière and many others) there are song cycles, including the Verlaine settings La Bonne Chanson and Cinq Mélodies de Venise, as well as L’Horizon chimérique, La Chanson d’Eve and Le Jardin clos.

Fauré’s Requiem, a setting of funeral rites rather than the full Requiem Mass of tradition, remains a standard work in choral repertoire. The earlier Messe basse (‘Low Mass’) was originally a collaborative composition (with Messager) of 1881, but its final revision in 1906 consisted of four Mass movements by Fauré himself. His prize-winning Cantique de Jean Racine marked the climax of his career as a student at the École Niedermeyer.

Chamber music by Fauré includes two fine violin sonatas, and the Piano Trio and String Quartet of his last years. There are several evocative smaller pieces, including the Romance, Berceuse and Andante for violin and piano and the Élégie, Romance and Sérénade for cello and piano.

Fauré made a significant addition to piano repertoire, particularly in a series of 13 barcarolles and a similar number of nocturnes, as well as five impromptus and a single Ballade. The piano duet suite Dolly was written in the 1890s for the daughter of Emma Bardac, later wife of Debussy, after divorce from her banker husband, a singer for whom Fauré wrote La Bonne Chanson.