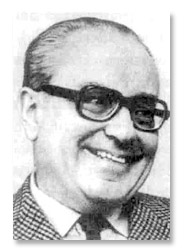 
Alberto Ginastera occupied a leading position in the musical world of his native Argentina, where he exercised strong influence over a younger generation of composers. He later spent much time in Europe, settling in Geneva. His style of writing developed from overt nationalism to a flexible application of the serialist principles proposed by Schoenberg.

The ballet Estancia is evocatively Argentinian, with its echoes of gaucho life. The opera Don Rodrigo, based on a 12-note series, makes original use of spacial effects; while the operas Bomarzo and Beatrix Cenci draw also on Renaissance forms, set, as they are, in Renaissance Italy.

Ginastera’s orchestral music includes a Concerto for harp, two concertos for piano, and concertos for violin and for cello. Ollantay (three symphonic movements), Pampeana No. 3 (a symphonic pastoral) and Overture to a Criollo Faust have strongly Latin American elements.

Chamber music by Ginastera includes the first two Pampeanas, for violin and piano and for cello and piano respectively, in addition to string quartets, the third with a soprano and texts by Lorca, Alberti and Jiménez.

In his relatively small amount of piano music Ginastera draws largely on Argentinian folk-music of one kind or another. His three piano sonatas offer a wider spectrum, and his compositions for organ reflect the influence of Bach.