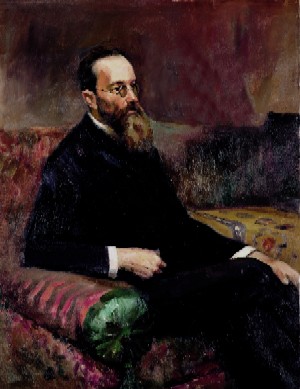 
One of The Five, the leading group of 19th-century Russian nationalist composers, Rimsky-Korsakov embarked at first on a career as a naval officer, following the traditions of his family, but he later resigned from the service to devote himself entirely to music. He was proficient as an orchestrator and set himself to smoothing out some of the apparent crudities in the work of some of his fellow composers, completing and revising works such as Borodin’s opera Prince Igor and much of the seemingly uneven writing of Mussorgsky. He was respected as a teacher, his pupils including the young Stravinsky. Most generally known for his orchestral compositions, Rimsky-Korsakov wrote songs and choral music, chamber music and works for piano. His textbook on orchestration has been widely if not always wisely used.

Of the 15 operas completed by Rimsky-Korsakov, mention may be made of The Snow Maiden, The Maid of Pskov, The Tale of Tsar Saltan, Mlada, Sadko, The Legend of the Invisible City of Kitezh and the satirical and once-banned Le Coq d’or (‘The Golden Cockerel’). Orchestral and instrumental excerpts from some of these may be very familiar, including the famous ‘Flight of the Bumblebee’ from The Tale of Tsar Saltan depicting a prince who turns himself into a bee and stings his wicked aunts.

Of the various orchestral works of Rimsky-Korsakov, Capriccio espagnol (‘Spanish Caprice’) and Sheherazade are by far the best known, followed by the Russian Easter Festival overture. The title of the Capriccio espagnol is self-explanatory; Sheherazade, with no detailed and specific programme, is based on the tales told in The Arabian Nights by the princess Sheherazade (represented by a solo violin) in her effort to postpone the sentence of death declared on her by her master, the Caliph.