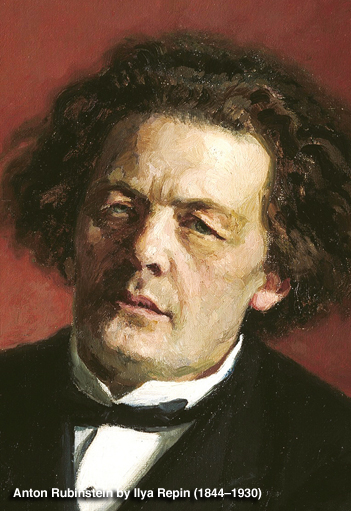 
Not to be confused with the great pianist Artur Rubinstein, born in 1887, Anton Rubinstein was an even greater performer in his time and a clear rival to Liszt and other great pianists of the 19th century. He had a marked effect on the development of music in Russia, establishing the first system of professional musical training at a new Conservatory in St Petersburg in 1862. His brother Nikolay set up a similar institution in Moscow. The conservatories were not welcomed by the nationalist composers, who regarded them as a German intrusion (despite the Rubinsteins being Russian, though of German-Jewish extraction). As a composer Anton Rubinstein was prolific, writing, as his brother suggested, enough music for both of them. His very technical facility told against him so that by the time of his death his work was not properly valued by supporters of Russian musical nationalism.

Rubinstein wrote 17 operas. These are no longer part of general repertoire, but excerpts from the fantastic opera The Demon and the opera Feramors may be heard occasionally in concert extracts.

Rubinstein’s orchestral compositions include six symphonies, of which the second, ‘Ocean’, is the best known. He wrote five piano concertos and other works for piano and orchestra, and concertos for both violin and cello.

As prolific here as in other forms of music, Rubinstein wrote a number of string quartets, three violin sonatas and two cello sonatas in addition to other chamber works. None is often heard, except possibly the Sonata for viola and piano—a useful addition to an otherwise exiguous repertoire for the viola.

Rubinstein, as a leading virtuoso of the piano, wrote quite prolifically for the instrument. Of all the sonatas, suites, serenades and other pieces, the Melody in F remains notorious in its popularity.