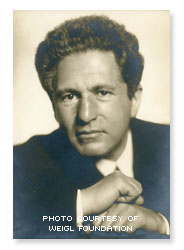 
The Austrian composer Karl Weigl grew up in the rich musical culture of turn-of-the-century Vienna and established a successful career there as a composer and teacher. His name became associated above all with chamber and symphonic music: the major string quartets of the day played his chamber works, Ignaz Friedman gave the première of his Piano Concerto, and Wilhelm Furtwängler, Volkmar Andreae, George Szell, Rudolf Schulz-Dornburg, Ferdinand Löwe, and others conducted his orchestral works. Weigl’s world seemed secure, his future assured. But with Hitler’s rise to power in Germany this world began to crumble. When the Nazi annexation of Austria in 1938 forced Weigl and his family into exile he found himself, at the age of 60, having to establish himself anew in a world where his name was virtually unknown. Although he continued during the last 11 years of his life to compose orchestral works, his new and diminished audiences in the United States became acquainted with him only as a composer of Lieder and chamber works. Those who first became acquainted with him at one of the private musicales where he frequently performed would have thought of him even more narrowly, as a pianist and composer for piano.

Weigl wrote four substantial solo piano works in his early years but then focused increasingly on more ambitious projects; only when circumstances changed in the late 1930s, recognising that small works had a better chance of reaching an audience, did he again write for solo unaccompanied piano. Similarly, though in the early years he had occasionally performed publicly as accompanist for his own Lieder or piano works, only when faced with exile did he resume practising the instrument and performing in public.