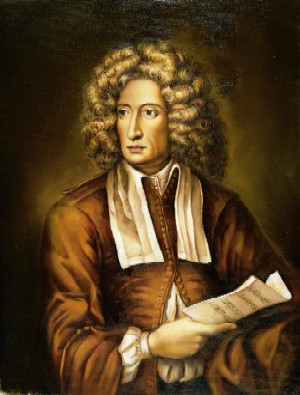 
The work of the Italian violinist–composer Arcangelo Corelli exercised incalculable influence over the following generation of composers, not least over Handel, who worked briefly with him in Rome in 1707. Corelli was born at Fusignano in 1653 and studied in Bologna, an important musical centre. His later career was chiefly in Rome, where he served the exiled Catholic Queen Christina of Sweden, Cardinal Pamphili, and the young Cardinal Ottoboni, in whose palace he lived for a number of years. He died in January 1713 and was buried in the Pantheon, a sign of the respect in which he was held.

Corelli’s influence depended largely on his published instrumental music, notably 48 Trio Sonatas for two violins and basso continuo (generally harpsichord and cello), 12 Sonatas for violin and continuo and 12 Concerti grossi, works for string orchestra with a solo group of two violins, cello and harpsichord. The violin sonatas include a particularly well-known set of variations on the popular dance-tune La folia, a melody used by many composers of the period. Concerto grosso No. 8 is the famous ‘Christmas’ Concerto, which includes a pastoral movement setting the scene for Christmas, to be played on the night before the festival.