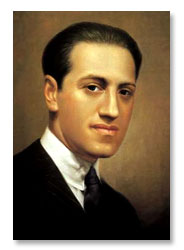 
In a period in which American nationalist music was developing with composers of the calibre of Aaron Copland and others trained in Europe, George Gershwin, the son of Russian Jewish immigrant parents, went some way towards bridging the wide gap between Tin Pan Alley and serious music. He won success as a composer of light music, songs and musicals, but in a relatively small number of compositions he made forays into a new form of classical repertoire.

Gershwin won serious attention with his opera Porgy and Bess, a drama of Black America, set at first in Catfish Row, Charleston, South Carolina. There is an effective instrumental suite, Catfish Row, derived from the opera, while the attractive song ‘Summertime’ has proved particularly memorable.

Gershwin’s Rhapsody in Blue, written in 1924 for Paul Whiteman and his jazz band, marries jazz with something of the classical concerto form, an avenue further explored in Gershwin’s Piano Concerto of the following year. The tone poem An American in Paris again offers a synthesis between apparently divergent forms of music.