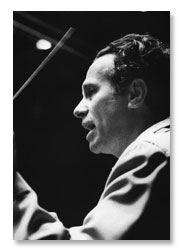 
Both Antal Dorati’s parents were musicians: his father was a violinist in the Budapest Philharmonic Orchestra and the Orchestra of the Budapest Opera, while his mother was a teacher of music. Antal was the youngest student ever to have graduated from the Franz Liszt Academy, which he did when he was only eighteen in 1924. His teachers at the Academy included Bartók, Kodály and the distinguished pedagogue Leo Weiner, all of whom were also family friends. On graduation he immediately joined the music staff of the Budapest Opera as a répétiteur, making his conducting debut there during the same year. He remained with the company for four years, before being engaged in 1928 as Fritz Busch’s assistant at the Dresden Opera, where he worked for only one season before becoming chief conductor at the Münster Opera in Westphalia, a position he held until 1933. While at Münster Dorati also conducted extensively as a guest, appearing in concert and opera throughout Germany, Hungary and Czechoslovakia.

From 1934 he worked as a conductor with the successor company to Diaghilev’s ballet company, the Ballets Russes de Monte Carlo, with whom he toured throughout Europe and the USA. He became chief conductor of the de Basil Company after it split from the main company in 1938, the year after he had made his American debut as an orchestral conductor with the National Symphony Orchestra of Washington DC. Dorati was chief conductor of the American Ballet Theatre from 1941 to 1945, as well as director of New York’s New Opera Company between 1941 and 1942. Following the reorganisation of the Dallas Symphony Orchestra he was appointed as its chief conductor in 1945, remaining with it for four years and becoming an American citizen in 1947.

Two years later Dorati moved from Texas to Minnesota, becoming chief conductor of the Minneapolis Symphony Orchestra in 1949. With this orchestra he made over one hundred recordings for the Chicago-based Mercury label, whose audiophile engineering, appropriate choice of repertoire and energetic marketing ensured success. Mercury helped to make Dorati’s name very well known internationally: both his mono and later stereo recordings of Tchaikovsky’s Overture, The Year 1812, featuring real cannon and musket fire, were best-sellers. He proved to be an excellent orchestral trainer and raised the Minneapolis Orchestra’s standards significantly. In Europe he first conducted the London Symphony Orchestra, with which he was later to be closely associated, in 1946, and following the formation of the Philharmonia Hungarica in Germany in 1957, after the Hungarian uprising of the previous year, he became its honorary president.

Dorati left Minneapolis in 1960 and returned to Europe, where he studied Italian Baroque and pre-Baroque music and conducted opera and concerts in Hamburg, London, Rome, and Vienna. He made his debut at the Royal Opera House, Covent Garden in 1962, with Rimsky-Korsakov’s rarely-heard The Golden Cockerel, and was recruited by the BBC’s director of music, Sir William Glock, as chief conductor of the BBC Symphony Orchestra in 1963. He stayed with the orchestra for three years, once again dramatically improving playing standards. Thereafter he held a succession of similar appointments, in which his disciplinary skills and strong musical character were soon to bring good results: the Stockholm Philharmonic Orchestra (1965–1972), the National Symphony Orchestra of Washington DC (1970–1977), the Royal Philharmonic Orchestra (1975–1978), and the Detroit Symphony Orchestra (1979–1984) were all ensembles to benefit. His excellent technique as a recording conductor ensured that he made commercial recordings with all these orchestras. In 1981 he became the conductor laureate for life of the Stockholm, Detroit and Royal Philharmonic Orchestras. In addition to his conducting he was a composer of note, and several of his compositions remain in print.

Antal Dorati was an excellent orchestral technician, whose clear and disciplined conducting made him an exceptional builder of orchestras. These qualities also made him a superb recording conductor who could be relied upon to deliver a clean and characterful orchestral performance within the time allotted. Although English musicians at both the LSO and the BBC Symphony Orchestra found him to be highly demanding, and at times balked at his occasionally robust comments about the quality of their playing, nonetheless with him conducting, the results were generally impressive. In addition to his extensive recording programme with Mercury, which lasted right up to its take-over by Philips in the early 1960s, Dorati also made many recordings for Decca during his later years.

His discography is huge. His experience and skills as a ballet conductor are clearly demonstrated in his rhythmically taut readings of Stravinsky’s ballets The Firebird, Petrushka, and The Rite of Spring, and in his stylish recording of the complete score of Tchaikovsky’s Swan Lake. Dorati’s landmark recording of all the symphonies of Haydn with the Philharmonia Hungarica has earned justified praise, as have his fine readings of many of Haydn’s operas, made with the Lausanne Chamber Orchestra. Apart from these, Dorati’s opera recordings were regrettably few, but his readings of Wagner’s Der fliegende Holländer, with the orchestra of the Royal Opera House, and Richard Strauss’s Die ägyptische Helena, with the Detroit Symphony Orchestra, reveal a strong musico-dramatic mind at work. Also of note are his recordings of the music of the Second Viennese School, especially his brilliant realisations of the suites from Alban Berg’s two operas, Wozzeck and Lulu. With the BBC Symphony Orchestra he brought together on one influential long-playing record the music of Charles Koechlin (Les Bandar-Log), Olivier Messiaen (Chronochromie), and Pierre Boulez (Le Soleil des eaux). The distinguished American critic and recording executive, David Hall, recalled that some of the most exciting recording sessions he ever attended during the early 1950s were those in which Dorati conducted the Chicago Symphony Orchestra for Mercury in Schubert’s Symphony No. 8 ‘Unfinished’, Tchaikovsky’s Romeo and Juliet, Bartók’s Miraculous Mandarin and Kodály’s Peacock Variations, all works representing heartland territory for this conductor.